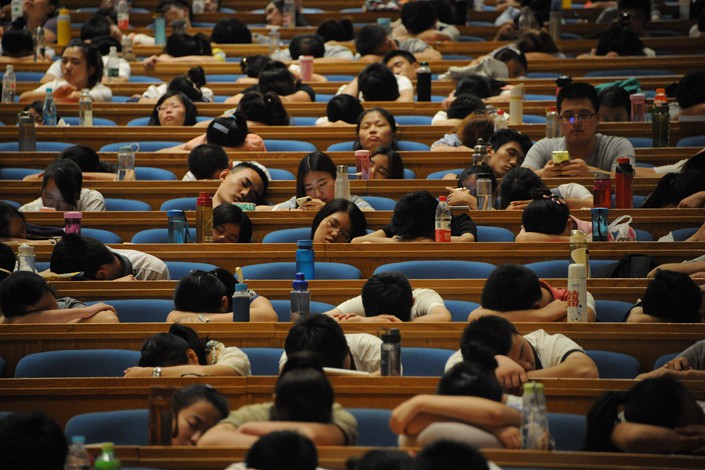 Last week, 18 students at Huazhong University of Science and Technology in Central China’s Hubei province didn’t have enough credits to graduate. Instead, they received certificates from a less prestigious polytechnic program, comparable to a degree from a community college in the U.S.

The news went viral on social media in China, where it is rare to see university students struggle so much. The average rate of students who fail to finish their degree courses at top-ranked universities in China is around 5%, compared to 20% in Ivy League schools in the U.S., said Zhang Duanhong, associate professor in Tongji University’s Higher Education Research Institute.

The Chinese government has long promoted higher education, but it has loose restrictions on graduation. Ever since China’s Ministry of Education reformed the admissions system to encourage more enrollment in 1998, the number of undergraduates has surged from less than 7 million to 30 million.

But the incident in Hubei has triggered widespread concern that Chinese students have grown lazy after completing their intensive college entrance exams and getting into university. Huazhong University of Science and Technology is one of the 39 high-ranking schools that was selected for funding under China’s ambitious “985 Project” — however, some university students are slacking off. “My roommate always skipped classes, woke up at noon, ordered takeout and played games, and then watched live-streaming broadcasts, going to sleep at 2 or 3 in the morning,” one university student told Caixin.

Another student in the eastern province of Jiangsu told Caixin: “The places where college students frequently go to are not classrooms and libraries, but the bedroom and Internet cafes.”

Until recently, there wasn’t much incentive to do otherwise. Many universities offer makeup exams to green-light students who are failing, which allows institutions to report better graduation and employment rates to authorities.

But now, laziness among university students has raised concerns from the government as well as from netizens. In September, the Ministry of Education announced new regulations asking undergraduate schools to cancel make-up exams and come up with stricter graduation requirements.

Universities themselves have also cracked down on loose graduation requirements. This year, six students at Yunnan University were asked to drop out of school, and at North Sichuan Medical College, 83 students failed to graduate — the highest number in the school’s 67-year history.

Zhang told Caixin that downgrading full-fledged undergraduates to students in three-year polytechnic programs offers failing students a way out, and that the new restrictions for graduation are normal and should not be surprising.

Meanwhile Zeng Tianshan, deputy dean of the National Institute of Education Sciences, which is backed by the Ministry of Education, told Caixin that Chinese universities are shifting from being difficult to enter and easy to graduate from, to being difficult to enter and difficult to graduate from. But it is unknown when Chinese universities will ask for students’ high-quality academics, instead of simply following the government’s orders.