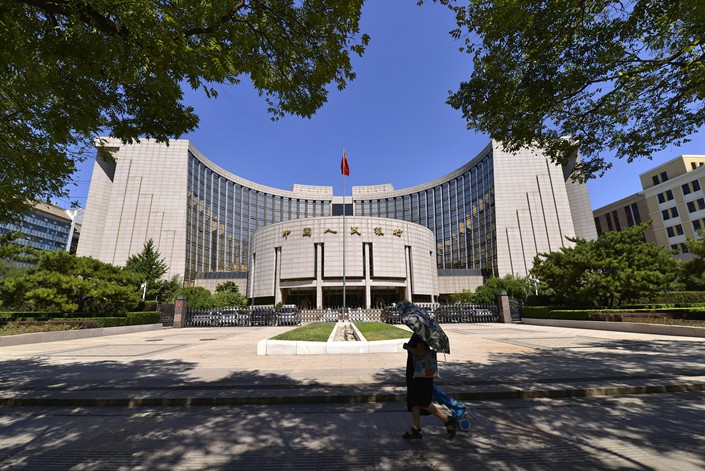 The headquarters of the People’s Bank of China is seen in Beijing. Photo: VCG

China’s central bank has selected a low-profile asset management company it controls to join a government effort to provide credit support to private companies that sell bonds, Caixin has learned.

”The mission of Huida this time is to provide insurance against the risk of bond default, and offer guarantees on private enterprise bonds,” a source familiar with the matter told Caixin. “From a short-term perspective, the practice would be like crossing a river by feeling the way over the stones.”

Representatives from Huida joined a panel held by the central bank on Wednesday to discuss the new policy instruments to support bond financing for private enterprises, according to a statement (link in Chinese) on PBOC’s website.

Since last week, the PBOC has stepped up its financial backing for the country’s private sector, which has suffered a triple whammy from the deleveraging campaign, the rising number of bond defaults, and the recent market turmoil triggered by the forced selling of shares that had been used as collateral for loans.

On Monday, the central bank said it plans to provide 10 billion yuan ($1.44 billion) to China Bond Insurance Co. Ltd., a state-backed bond insurance company, as credit support for debt sales by private enterprises. Now that it has picked Huida to further implement the support of bond financing, the PBOC is likely to inject funds into Huida to boost its ability to insure bonds sold by private firms, Caixin has learned.

Established in 2005 with a registered capital of 100 million yuan, Huida is a low-profile entity that was set up specifically to dispose of nonperforming assets within the central bank system. However, some have questioned Huida’s capability to offer guarantees to bonds, as it had never tapped the bond market before.

According to current regulations, bond insurance companies can guarantee bonds of small and midsize enterprises (SME) up to 15 times of its net assets, which means Huida, with 100 million yuan in registered capital, could guarantee up to 1.5 billion yuan worth of SME bonds.

The central bank has decided to use the bond market to bolster private sector financing as it is relatively open and transparent and can guide expectations, said Xu Zhong, director general of the PBOC’s research bureau, in a Wednesday opinion piece.

“The aim of these measures is to compensate for the financing shortcomings affecting the private-sector economy, and to provide short-term, market-based support for firms that are facing temporary difficulties, but are competitive, have a market for their products, have good prospects and possess technology,” Xu said.