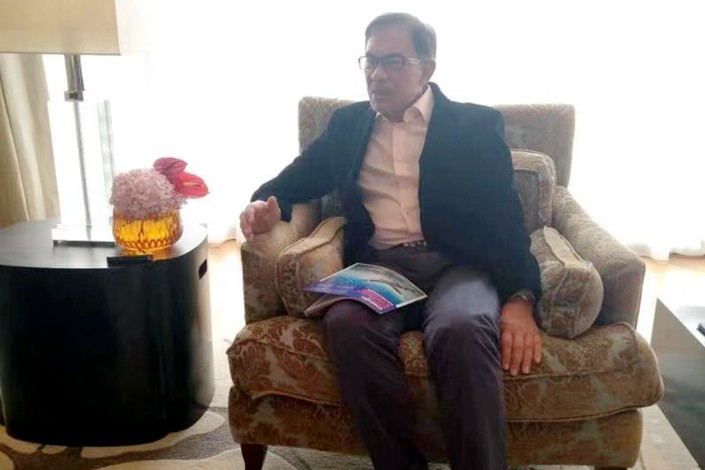 China has made exporting its infrastructure-building expertise a top priority under its Belt and Road Initiative, targeting such projects in developing markets like Malaysia. But recently elected Prime Minister Mahathir Mohamad, 93, surprised Beijing in August by canceling several major China-led projects worth billions of dollars, citing the unacceptable debt load.

Anwar, 70, acknowledged the recent cancellations to Caixin, though he added that “negotiations” are ongoing, without elaborating.

Malaysia wants to draw more investment in areas like manufacturing technology, in which China has been a leader, in a bid to help it upgrade its own labor-intensive sector, Anwar told Caixin in an interview in Beijing on Thursday.

Southeast Asia’s third-largest economy hopes to draw in investments “not only in construction, but technology, IT, artificial intelligence, where the Chinese have gone up so far,” he said.

Anwar arrived in the Chinese capital on Monday at the invitation of Renmin University to give a talk on “The Rule of Malaysia and the Future of China-Malaysia Cooperation” two days later.

Anwar is a top official in Malaysia’s ruling coalition Pakatan Harapan, or Alliance of Hope, which unseated longtime Prime Minister Najib Razak in a shock election result in May. The coalition chose Mahathir to be its initial prime minster, but agreed to install Anwar in two years.

Anwar was a deputy prime minister in the 1990s, when he also served under Mahathir and was at one point tapped to become the next prime minister. But he later fell from grace amid allegations of sodomy and corruption, and was later imprisoned before his recent release in May following a royal pardon.

Recalling his experience in 1990s, when he worked closely with then-Chinese Vice Premier Zhu Rongji, Anwar said both countries were still in the early stages of development at that time. But now China has leapfrogged Malaysia in many areas where the former could now help the latter play catch-up.

On his trip, Anwar has met Chinese Foreign Minister Wang Yi, as well as Chen Yuan, vice chairman of the National Committee of the Chinese People’s Political Consultative Conference, the top advisory body to China’s legislature. Anwar also attended a luncheon hosted by Song Tao, who heads the International Department of the Central Committee of the Communist Party of China.

Anwar, who this month became a member of Parliament after a by-election, said he has reassured his Chinese counterparts that Beijing is an important ally and its investment is welcome in Malaysia.

“The business deals of construction, infrastructure must be very transparent,” he said. He added that kickbacks and political interference must not be involved in such deals, in an apparent reference to allegations made against former Prime Minister Najib, who is now facing corruption charges.

Mahathir swept to power in May, and three months later said Malaysia “has scrapped for now” three China-backed projects worth over $22 billion, saying they would saddle the country with an unacceptably heavy debt.

Anwar’s visit comes at a critical juncture in international relations between Malaysia and China, according to Malaysian Senator Yusmadi Yusoff.

“Beijing would want to peer into the crystal ball to understand the nuances of a leader with whom they would be dealing with in the future and vice versa,” the aide to Anwar wrote in an opinion piece to the Nikkei Asian Review.

“Malaysia, under this stewardship will witness a new era in its relations with China underpinned by history, culture and diplomacy against the backdrop of a shifting world order. A world order where we no longer cower to the whims of any one superpower but promote a shared vision which would bring long lasting prosperity to all,” he said.