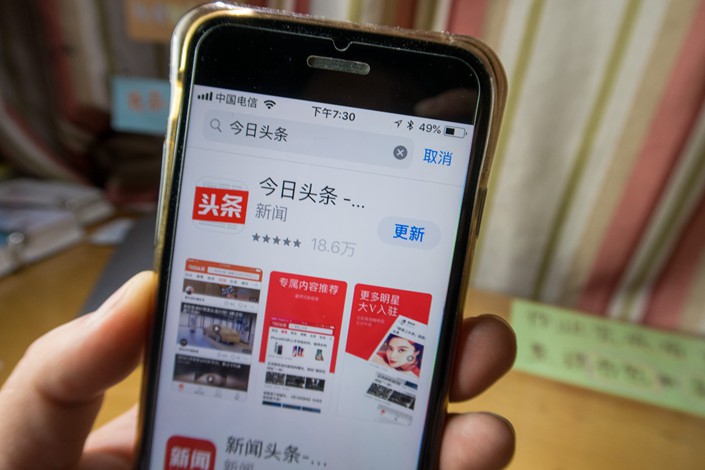 Online media giant Bytedance Ltd. has nearly finished a new fundraising round that should total about $3 billion, as it seeks a lofty valuation that would make it China’s third-largest internet company, sources told Caixin.

Bytedance has become China’s hottest internet company by building off its original Jinri Toutiao news-aggregating app, and growing through a series of more recent acquisitions that include the wildly popular short-video app TikTok, known locally as Douyin. Many of its products use artificial intelligence to determine a users’ preferences and “push” related material in that person’s direction.

The company will raise up to $3 billion in the current round through issue of convertible bonds, a knowledgeable source told Caixin. One of its main focuses in the latest round has been attaining a lofty valuation of $70 billion to $80 billion, with no plans for an IPO this year, according to another source. Another source previously told Caixin the company was steadfast in its determination to reach a valuation of about $75 billion, saying it wasn’t giving any discounts to potential investors.

Such a valuation would make Bytedance a distant third among China’s internet companies, behind only leaders Alibaba Group Holding Ltd. and Tencent Holdings Ltd., both of which are valued at more than $300 billion. The next most-valuable company, publicly traded search leader Baidu Inc., is worth about $65 billion. Bytedance would also be China’s second-most valuable private equity-backed company, behind only Ant Financial Services Group, the financial arm of Alibaba.

Backers in the latest round include SoftBank, KKR, General Atlantic and Primavera Capital. A Bytedance representative contacted by Caixin had no comment on the matter.

Founded in 2012, Bytedance has the distinction of being one of China’s only major internet companies that hasn’t received funding from either Alibaba or Tencent, a decision that has helped it to maintain its independence. Most of the investors from its latest funding round are based overseas, as the company looks to boost its global presence, improve its user experience and commercialize.

Like many other Chinese internet companies, Bytedance has taken some fledgling steps onto the global stage, with operations in India, Southeast Asia and Japan. But most of those companies have found limited success in such markets so far, where they often have to compete with well-established local players as well as global giants like Amazon Inc. and Google LLC.