The 35-Year-Old Behind China's Most Valuable Tech Startup 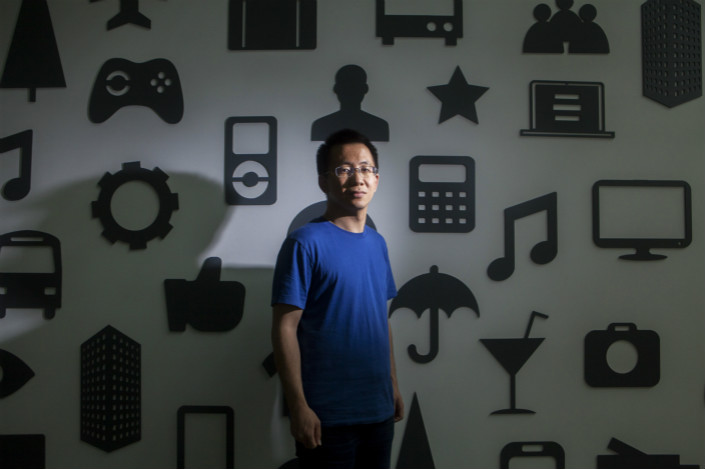 Back then, the question was how a 29-year-old locally trained software engineer could outsmart the numerous news portals operated by the likes of social media behemoth Tencent Holdings Ltd. and extract profit where even Google had failed.

Zhang, now 35, proved them wrong. Today his company, Bytedance Ltd., is on its way to a more than $75 billion valuation — a price tag that surpasses Uber Technologies Inc. to top the world, according to CB Insights. The latest in a long line of investors who’ve come around is SoftBank Group Corp., which is said to be planning to invest about $1.5 billion. Bytedance now counts KKR & Co., General Atlantic and even Sequoia as backers. Much of its lofty valuation stems from the creation of an internet experience that’s a cross between Google and Facebook.

“The most important thing is that we are not a news business. We are more like a search business or a social media platform,” Zhang said in a 2017 interview, adding that he employs no editors or reporters. “We are doing very innovative work. We are not a copycat of a U.S. company, both in product and technology.”

What’s remarkable is Zhang was able to do it all without taking money from the twin suns of China’s internet: Alibaba Group Holding Ltd. and Tencent. It’s the first startup to emerge from the dwindling cohort of mobile players that hasn’t sought protection or funds from either of the two. In fact, it’s often locked horns with them, in court and elsewhere. And it’s arguably more successful at engaging youthful audiences abroad.

The story of how Bytedance became a Goliath begins with news site Jinri Toutiao but is tied more closely to a series of smart acquisitions and strategic expansions that propelled the company into mobile video and even beyond China. By nurturing a raft of successful apps, it’s gathered a force of hundreds of millions of users and now poses a threat to China’s largest internet operators. The company has evolved into a multi-faceted empire spanning video service Tik Tok -- known as Douyin locally -- and a plethora of platforms for everything from jokes to celebrity gossip.

But as with Facebook at the same stage of its life, Bytedance now faces questions over when or even how it will start making a profit.

“The predominant issue in China’s internet is that the growth in users and the time each user spends online has slowed dramatically. It is becoming a zero-sum game, and costs for acquiring users and winning their time are increasing,” said Jerry Liu, an analyst with UBS. “What Bytedance has created is a group of apps that are very good at attracting users and retaining their time, in part, leveraging the traffic from Jinri Toutiao.”

Despite its seeming isolation, it’s become the most successful major Chinese tech company in creating an international base, venturing via apps like Tik Tok into the U.S., Southeast Asia and Japan. Even Tencent’s WeChat had to pump the brakes on its own overseas initiative four years ago.

What Zhang perceived in 2012 was that Chinese mobile users struggled to find information they cared about on many apps. That’s partly because of the country’s draconian screening of information. Zhang thought he could do better than incumbents such as Baidu, which enjoyed a near-monopoly on search. The latter conflated advertising with search results, a botch that would later haunt the company via a series of medical scandals.

There was little Toutiao could do about censorship — in fact, the company’s been repeatedly excoriated by authorities for failing to filter content and been forced to clean up its services with alarming regularity. But Zhang held fast to his early vision of delivering content that mattered to users through AI. The closest American equivalent was Facebook’s news feed.

After falling flat with the bulk of China’s venture capital stalwarts, Zhang eventually secured investment from Susquehanna International Group. It began offering the news app in August 2012. The platform studied what users read and searched for, then referred information and articles based on those habits. The more people used it, the better the experience, and the longer people stayed. By mid-2014, daily active users had climbed to more than 13 million. Sequoia finally came to the table, leading a funding round of $100 million.

“We push information, not by queries, by news recommendations,” Zhang said in the interview last year.

But it was video that really propelled Bytedance into the big leagues.

Streaming services have always been popular in China. Even during the desktop era, companies like YY Inc. championed a model where people sang and danced in virtual showrooms to win online gifts from fans. Later, outfits like Kuaishou fueled that penchant for zany showmanship. Bytedance saw an opportunity, but made its videos much shorter: 15 seconds, to be precise.

Around September 2016, it quietly launched Douyin. The app let users shoot and edit footage, add filters and share them across platforms like the Twitter-like Weibo or WeChat. That format appealed to shorter millennial attention spans and became an instant hit, so much so that WeChat later blocked direct access to the app.

A year after, Bytedance acquired Musical.ly for $800 million. It saw synergy between the buzzy teen U.S. social video app created by Chinese co-founders and Tik Tok, and is now in the process of combining them. Tik Tok and Douyin had a combined 500 million users as of July.

The challenge now is in translating buzz and viewership into dollars. The company is expanding its ad sales operations, particularly for Toutiao. Several media buying agencies said its massive reach and the attention it draws is a natural lure for marketers. Many said Bytedance is even pulling spending away from Tencent. Bytedance, which previously cut a deal with Cheetah Mobile to sell ad space, has brought most of its ad sales in-house, said Kenneth Tan, the chief digital officer for Mindshare China, an agency.

“From a pricing perspective, they are expensive for what they are. They definitely charge a premium,” Tan said. “But that has not been an inhibitor for the large brands.”

There’s a big caveat, however. Brands remain cautious about Bytedance’s regulatory issues, particularly given Beijing’s historic unpredictability. This year, it had to shut down a popular joke-sharing app in April just as it appeared to take off. It also suspended Douyin and its bread-and-butter Toutiao around the same time.