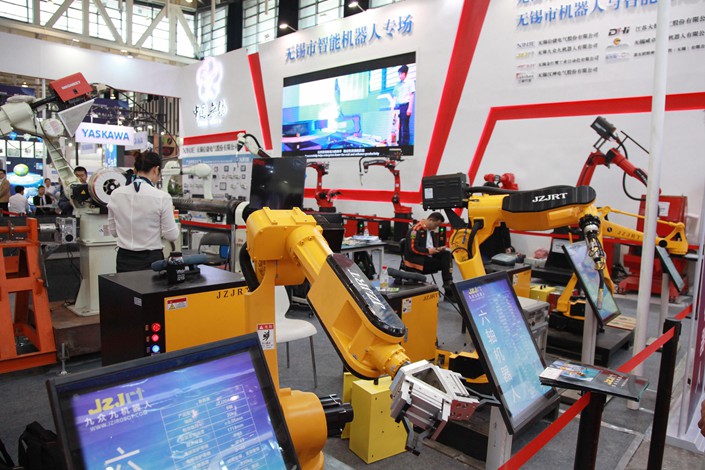 Another Chinese company is making a foray into Germany’s robotics market, undeterred by Berlin’s growing concerns that Beijing is plucking away its best technology for its own strategic ends.

Jiangsu Hagong Intelligent Robot Co. Ltd. announced that its board gave the go-ahead for it to acquire Nimak GmBH, along with related companies Nimak KG and Nickel GmbH for 88.03 million euros ($100 million), according to a filing (link in Chinese) with the Shenzhen Stock Exchange on Thursday.

Nimak specializes in manufacturing advanced welding tools and machines for use in automotive, aircraft and household appliance production, according to its website. The deal will still need to gain approval from the German Federal Ministry for Economic Affairs and China’s State Administration of Foreign Exchange, the filing said.

China has been on a robotics buying binge in recent years as it looks to take the lead in the field as part of the government’s “Made in China 2025” initiative, its grand plan to upgrade the economy to produce more advanced technologies. It bought around 137,900 industrial robots in 2017, about as many as the next four biggest buying countries combined, according to data from the International Federation of Robotics.

It has been particularly active in Germany, a leader in the field, according to a report from the Bertelsmann Foundation. The report looked at 175 Chinese merger and acquisition deals (link in German) involving stakes of 10% or larger from 2014 to 2017 and found that 64% were in industries involved in Made in China 2025. The most notable was appliance-maker Midea Group Co. Ltd.’s 4.5 billion euro ($5.1 billion) acquisition of Kuka AG, Germany’s biggest robotics company, in 2016.

This has led to Berlin taking an increasingly tough stance with Chinese companies. In August, Shandong province-based appliance and machinery manufacturer Yantai Taihai Group Co. Ltd. called off a deal for a German machinery-making peer as it faced an imminent veto from the German government. After the Kuka deal, the government strengthened its scope for investigating and blocking foreign acquisitions to define giving up technological know-how and access to “critical infrastructure” as potential national security threats.

Domestic political pressures will make approval even harder in the months ahead, said Maximilian Hess, the head of political risk at AKE International. The junior member of the ruling ‘grand coalition’ is likely to oppose a Chinese takeover as it looks to stave off a dramatic loss of its populist support after entering into government with Angela Merkel’s Christian Democratic Union, Hess said. “Germany has expanded the law it can use to block such deals and it is one area where the SPD, the center-left party that is the junior in the coalition and bleeding support after having continuously formed ‘grand coalitions’ with Merkel, can make some populist noise to rally their base,” Hess added.

Despite fears that China might be looking to dominate the robotics sector, “robot density” in the country remains low. At 97 robots per 10,000 workers, it is below the European average of 106 per 10,000.

“When you control, as one should, for the size of GDP, employment or the existing stock of robots, the figure is less impressive,” Marcin Piatkowski, senior economist at the World Bank, said on Twitter.

China’s push into automation is being driven by the need to continue boosting productivity as its population ages, wrote Nathan Chow, a strategist with DBS Bank. “An ageing population and domination by state enterprises are a recipe for weak productivity growth,” he wrote. “The speed of this demographic shift will become more apparent, given [China’s] falling fertility rate, which dropped below the “replacement level” in the 1990s and currently stands at 1.60. Against this backdrop, automation is key to reviving productivity.”