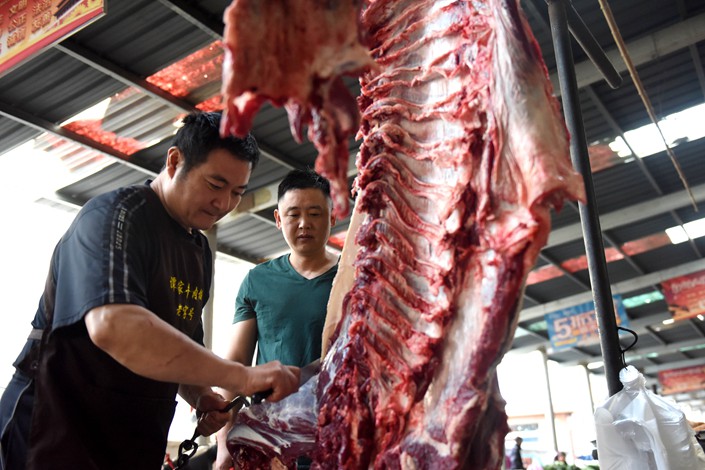 (Beijing) — Selina Li has sold imported beef in China for nearly a decade. And even she found it hard to convince her parents to try it.

“People my parents’ age, they won’t eat steak,” she said. “They don’t accept it.”

To convince her mom and dad they should be cooking with beef, Li brought home some “secondary” cuts of Australian beef — the flank and other parts of the cow that aren’t so expensive. She asked them to use the beef in Chinese dishes, as they would with pork. And much to their surprise, her parents found it enjoyable.

“They said, ‘This isn’t as tough as local beef,’ ” she said with a chuckle, attributing their initial skepticism to culture: “(Chinese people) prefer to have hot pot or street barbecue and beers (when they eat beef). It’s a different culture.”

As a beef seller, Li runs up against distrust of the meat all the time. And that’s because China, seemingly throughout its history, has been a pork country. About 60% of all meat consumed in China is pork, according to a recent outlook report published by the Organization for Economic Cooperation and Development (OECD) and the U.N.’s Food and Agriculture Organization (FAO). And China is only getting meatier: The same outlook report said the average Chinese citizen will consume 10% more meat in 2026 than in 2017.

But the makeup of that meat consumption is changing. “As the population plateaus and the proportion of citizens in poverty decreases, the animal-protein story in China is expected to reflect a slight shift in mix,” a 2018 McKinsey & Co. report states. Traditionally less-popular meats, most notably beef, are predicted to take a bite out of pork’s market share.

Still, China’s increasing appetite for beef will have costs. The shift will affect more than local gastronomy. It will impact both the economy and the environment on a global scale.

China’s “yellow cattle” breed has existed for thousands of years, but the breed was used primarily as a draft animal rather than a source of meat, according to a report by the Asian Agribusiness Research Centre. As such, beef was often seen as unfit to eat, and during the Song Dynasty (960-1279), rulers went so far as to ban the slaughter of cattle. Even today, elderly farmers in certain remote areas of China maintain that eating beef is taboo, the study said.

An inclination toward pork “is mainly related to Chinese dietary preference, going back thousands of years,” said Pan Chenjun, a senior industry analyst at Rabobank in Hong Kong. Chinese people “have developed dishes and traditions related to pork.” A prescient example of pork-meets-history is the popular Hunan-style “hongshao rou,” or red-braised pork, famously the favorite dish of Mao Zedong.

In the People’s Republic of China, attitudes began to change — slowly. Under its First Five-Year Plan (1953-57), the country sought to turn large stretches of grassland into cattle-grazing ground, according to Thomas DuBois in “Big Meat: The Rise and Impact of Mega-Farming in China’s Beef, Sheep and Dairy Industries.”

“Although much of this product was destined for overseas markets, … local consumption of meat and dairy in cities adjacent to herding regions remained high, even during periods of great privation such as the Great Leap Forward,” DuBois wrote. “At a national level, however, per capita consumption of both meat and dairy remained very low throughout the first three decades.”

DuBois said that in the 1980s, an agricultural development policy was promoted with the slogan “stable for swine, active for poultry and fast for cattle and sheep.”

Even as beef production grew, local desire was stunted by a key issue: distrust in food safety. “People don’t trust local beef because of a few things that happened,” Li said, rattling off a list of high-profile scandals that have erupted in the past few years: the 2008 Chinese tainted-milk scandal; cattle across the country injected with water to inflate weight; sellers trying to pass off other meats as beef. In 2014, a Shanghai-based food-processing company was discovered to have repackaged and sold expired meat to McDonald’s and KFC restaurants across the country.

Li’s own job at high-end food importer Classic Fine Foods capitalizes on this mistrust — Li sells only high-quality beef from trusted Australian farms. However, when asked about today’s food safety in China, she said, “I think it’s getting better.”

Today’s surge in demand for beef can be explained far more simply: millennials. Having grown up in an increasingly internationalized China, this younger generation is more willing to try meats that are slightly less-traditional. “People have more income and more exposure to Western-style food,” Pan said.

Beef imports to China increased by 46.8% in the first three quarters of this year, according to a report released by China’s General Administration of Customs on Oct. 12, said Xia Yiwen, a food and agriculture campaigner at Greenpeace. And a report by McKinsey forecasts that China will require an additional 250,000 tons of imported beef by 2025 — a 40% increase over 2015.

Prized imports come from Australia, Argentina, Uruguay and the U.S., whose own beef was removed from a Chinese import ban in 2017. Far cheaper imports hail from India, where a massive “carabeef” industry exports buffalo meat.

But going forward, China’s growing appetite for beef will impact more than dinner tables — it will affect both the environment and the economy on a global scale. Per capita consumption of beef and veal decreased by nearly 5% globally between 2008 and 2017, but is expected to rebound over the next decade, largely due to China, the OECD-FAO report said.

“While all forms of meat production impact our environment, beef production plays a disproportionate role in accelerating climate change,” said Xia, of Greenpeace, adding that raising cattle presents issues with both land use and the water supply.

The land required to produce beef is 28 times greater than that required for the production of dairy, pork, poultry and eggs combined, according to Xia. Beef production also requires a particularly high consumption of feed and has a large water footprint.