Caixin Explains: Why 7 Is the Yuan’s Unlucky Number 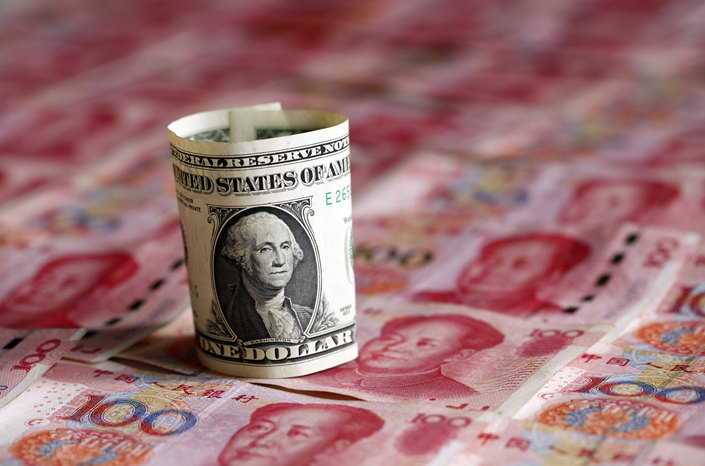 (Beijing) — The Chinese yuan hit a 10-year low against the dollar this week, pressured by trade tensions with the U.S., signs of slower growth and a narrowing gap between the U.S. Federal Reserve’s and China’s interest rates.

The currency has slipped 11% against the dollar this year, reaching levels not seen since 2008 when it was moving in the other direction after years of undervaluation.

Despite the recent free-fall, many people have fixated lately on a lower-profile milestone, namely whether the currency, trading at around 6.9670 to the dollar as of Thursday morning, might breach the 7 mark. Speculation on whether the currency will break that psychological barrier (心理关口xīnlǐ guānkǒu) is rife in financial circles. Why do people care so much about what amounts to a few cents of difference?

Currency pairs like the dollar and the yuan are priced to four decimal places. Only the first two have concrete equivalents that you could put in your pocket: cents, for the dollar, or fen, for the yuan. You can buy a pint of milk for $2.12, for instance, but not $2.1234. The third and fourth decimal places, which track changes in “basis points” and “pips,” respectively, are the preserve of professionals. These refer to truly tiny amounts of money — a change of one pip in the dollar-yuan exchange rate is equivalent to one hundredth of 1 percent of one yuan — so they only matter when you’re trading millions.

But as the yuan’s slide has continued, people beyond the rarefied circles of forex traders are starting to care about those little pips. The yuan, as of Thursday morning, came within a razor-thin 330 pips of the 7-per-dollar barrier.

Even when you’re trading huge amounts of money, getting 7 yuan for your dollar, rather than 6.9999, isn’t such a large difference — you’d get an extra 100 yuan for every million dollars you exchanged, about the price of a meal at a mid-scale restaurant in Beijing. The real reason that last pip is such a big deal is psychological. People seem to attach much greater weight to round numbers, like 7, than rational economic actors perhaps should.

The phenomenon is common in budget stores as well as forex markets, exploited by those looking to make a quick 99 cents. It’s also common in financial markets, where an index could suddenly look far less attractive if it breaches a big-looking number like 1,000 and slips to 999.

The 7-yuan barrier therefore largely matters, slightly circuitously, because everyone thinks it does. If the yuan breaks 7, the market could panic, believing more weakening is on the way. Traders would probably sell more yuan over such concerns, putting even more pressure on the currency. Wealthy individuals and businesses might start to pull their money or assets out of China before they lose even more value — dragging down the yuan further.

The People’s Bank of China (PBOC) thus has strong incentives to stop such vicious cycles before they start, and has several tools to defend the currency. In the last few months, the central bank has tightened its control over the parity rate, which sets the daily range within which the yuan can trade. It has also made it more costly to short the yuan. But China’s vast foreign exchange reserves, the biggest in the world, are probably its strongest defense: in 2015 and 2016, the central bank spent 1 trillion dollars propping up the yuan as it first began coming under pressure. For all these reasons, most analysts polled in October didn’t expect the yuan to break 7 this year — but a majority did expect it to happen in 2019.

On the other hand, a weaker yuan also makes Chinese exports cheaper and more attractive to buyers. This means there’s also a diplomatic dimension to the 7 yuan equation. U.S. President Donald Trump has accused China of weaponizing its currency within the ongoing trade war by deliberately pushing down the yuan’s value to make its exports more attractive. A recent U.S. Treasury report declined to label China a currency manipulator, but Treasury Secretary Steven Mnuchin voiced concerns over the yuan’s weakness.