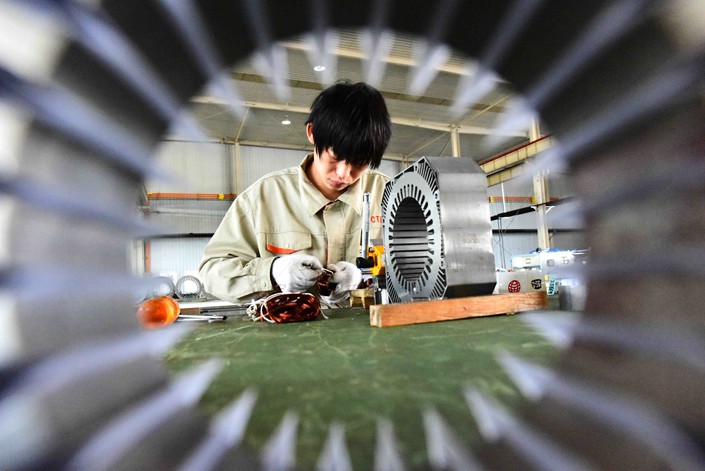 A worker assembles a motor in the workshop of a manufacturing enterprise in Weifang, Shandong province, on Wednesday. Photo: IC

The lackluster survey results add to evidence that the world’s second-largest economy is still facing headwinds from the ongoing trade war with the U.S.

The Caixin China General Manufacturing Purchasing Managers’ Index (PMI), which gives a snapshot of operating conditions in the manufacturing sector, picked up to 50.1 in October, just off a 16-month low of 50 in September.

The Caixin index, one of the first available monthly indicators showing China’s economic conditions, is closely watched by investors. A reading of 50 separates expansion from contraction. The higher above 50, the faster the expansion, while the further below 50, the greater the contraction.

New export orders placed with Chinese manufacturers contracted for the seventh consecutive month in October amid an escalating trade war with the U.S., the survey showed.

The China-U.S. trade disputes also drove down manufacturers’ optimism about the 12-month business outlook to its weakest level in 11 months, according to the survey.

The U.S. has imposed additional tariffs on $250 billion worth of Chinese imports since July, while Beijing has retaliated with new levies on $110 billion of U.S. goods. Overall, each side has imposed charges on half of each other’s annual exports to the other. Washington has been threatening to slap tariffs on all Chinese exports to the U.S., which could drag down China’s economic growth if they become a reality.

Among the five subindexes that make up the Caixin PMI, the one for output dropped to its lowest level in 28 months in October, moving closer to the dividing line of 50 despite staying in positive territory. The survey’s respondents attributed their largely unchanged output schedules to relatively subdued market demand.

The good news was that both new orders placed with manufacturers and inventories of purchased goods grew at a faster clip. The employment subindex also inched up despite remaining in negative territory, just off September’s 14-month low.

China’s official manufacturing PMI, released by the National Bureau of Statistics on Wednesday, dipped to 50.2 in October from 50.8 in the month before.

Manufacturing accounted for 30% of China’s gross domestic product in the first half of this year, while the services sector contributed 54%, according to Caixin calculations based on government data.

The Caixin China General Services Business Activity Index for November, which tracks the growing services sector, will be released on Nov. 5.