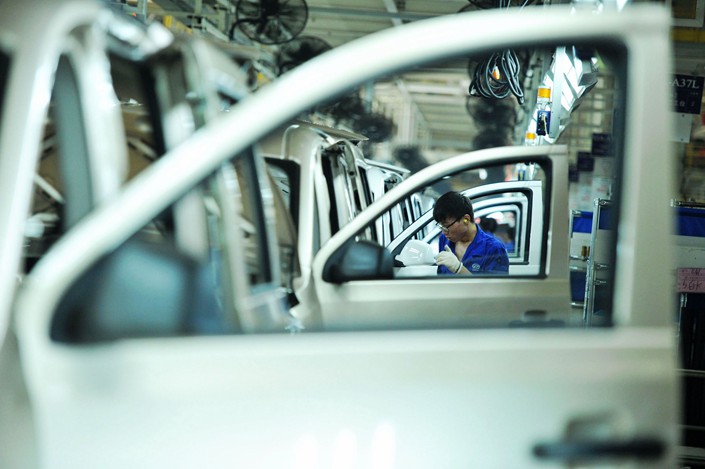 China’s manufacturing activity stagnated in September as both domestic and overseas demand cooled, a Caixin survey showed Sunday, adding to evidence that economic growth is slowing amid an escalating trade war with the U.S.

The Caixin China General Manufacturing Purchasing Managers’ Index (PMI), which gives a snapshot of operating conditions in the manufacturing sector, fell to 50, the dividing line that separates expansion from contraction, from 50.6 in August. The reading was the weakest in 16 months and marked the fourth straight monthly drop. The index hasn't dropped below 50 since May 2017.

The Caixin manufacturing PMI, one of the first available monthly indicators showing economic conditions in the world’s second-largest economy, is closely watched by investors. The larger the number above 50, the faster the expansion, while the further below 50, the greater the contraction.

“Generally speaking, expansion across the manufacturing sector weakened in September, as exports increasingly dragged down performance and continued softening demand began to have an impact on companies’ production,” said Zhong Zhengsheng, director of macroeconomic analysis with consultancy CEBM Group, a subsidiary of Caixin Insight Group. “Downward pressure on China’s economy was significant.”

Several key subindexes of the PMI retreated in September. Output expanded at the weakest pace in 11 months while the gauge of new orders fell to a level unseen in 27 months, a reflection of flagging demand at home and abroad.

New export orders contracted at the steepest rate since February 2016, with a number of companies saying that the China-U.S. trade war and subsequent tariffs had impacted overseas sales, according to the survey.

U.S. President Donald Trump's administration has imposed additional tariffs on $250 billion worth of Chinese imports since July, while Beijing has retaliated with new levies on $110 billion of U.S. goods. Each side has now imposed charges on half of the other side's annual exports and Washington has threatened to slap tariffs on all Chinese sales to the U.S.

Average purchasing costs rose solidly in September as suppliers raised prices for raw materials, the survey showed, but the pace of increase was lower than in August.

Companies remained downbeat about hiring in September. The employment subindex showed the steepest contraction in 14 months, indicating more companies were shedding workers than hiring. Anecdotal evidence from the survey showed headcount reduction was partly due to company restructuring and to natural wastage.

The level of optimism about the 12-month business outlook fell to its weakest in nine months.

Manufacturing accounted for 30% of China’s gross domestic product (GDP) in the first half of this year, according to Caixin calculations based on government data. The services sector was responsible for the lion’s share of the country’s economic activity, accounting for 54% of the total GDP over the period.

The Caixin China General Services Business Activity Index for September, which tracks the services sector, will be released on Oct. 8.