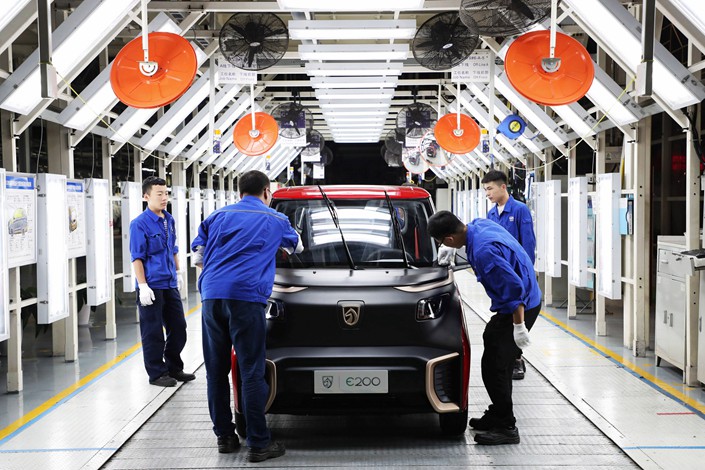 China’s manufacturing sector expanded at its slowest pace in more than two years in October, mainly due to intensifying trade disputes and a weeklong holiday, government data showed Wednesday.

China’s manufacturing purchasing managers index (PMI), which gives a snapshot of operating conditions in the manufacturing sector, dipped to 50.2 in October from 50.8 in the previous month, according to data from the National Bureau of Statistics (NBS). The reading marked its lowest level since July 2016.

A reading of 50 separates expansion from contraction. The higher the number above 50, the faster the expansion, while the further below 50, the greater the contraction.

The manufacturing PMI’s drop adds to concerns that the world’s second-largest economy will continue its slowdown in the coming months. China’s gross domestic product (GDP) grew 6.5% year-on-year in the third quarter, the weakest since the first quarter of 2009, when the global economy was mired in a financial crisis.

October has seen fluctuating supply and demand across the manufacturing sector due to external uncertainties and the National Day holiday in early October, NBS senior statistician Zhao Qinghe said in a statement (link in Chinese), analyzing the reasons for the PMI drop.

All five subindexes that make up the PMI — including the ones for output, new orders, stocks of purchased items, employment and suppliers’ delivery times, fell in October from the month before, NBS data showed (link in Chinese).

Among other gauges in the PMI survey, new export orders dropped for the third consecutive month to 46.9 in October, falling further into contraction amid an escalating trade war with the U.S. The reading hasn’t been this low since January 2016.

“With the headwinds to China’s economy from slower lending and the cooling property market likely to intensify in the coming months, we think more fiscal and monetary loosening will be needed to help put a floor beneath growth,” Julian Evans-Pritchard, an economist with research firm Capital Economics, said in a note.

China’s nonmanufacturing PMI, which includes the services and construction sectors, fell to a 14-month low of 53.9 in October, down from 54.9 in the month before, NBS data showed. This was mainly driven by the drop in the PMI for the services sector, which dipped to 52.1 from 53.4.

The PMI for the construction sector rose to 63.9 — its highest level so far this year, “a sign that local government efforts to kick-start infrastructure spending have continued to gain traction,” Evans-Pritchard said.

In the first half of 2018, the services sector was responsible for the majority of China’s economy, accounting for 54% of its GDP, according to Caixin calculations based on government data. Over the period, manufacturing and construction contributed 30% and 6% of its GDP respectively.

The independently compiled Caixin China Manufacturing PMI is scheduled to be published on Thursday.