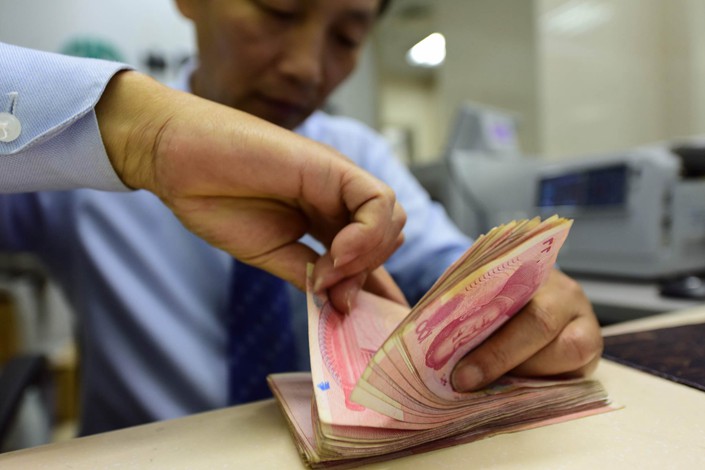 Growth in China’s net new yuan loans in September slowed despite government calls for expanding financial support for businesses, according to central bank data, adding to evidence that the world’s second-largest economy is facing downside risks.

Chinese banks made 1.38 trillion yuan ($199.5 billion) in net new yuan loans in September, up 8.8% year-on-year, though down from August’s 16.7% growth, according to data (link in Chinese) released Wednesday by the People’s Bank of China (PBOC).

The slower growth came after financial regulators, including the PBOC, urged banks to lend more to businesses to shore up slowing economic expansion amid an intensifying trade war with the U.S.

The hesitation in longer-term borrowing indicated companies’ weakening confidence in long-term growth as well as declining willingness to invest in local infrastructure projects, according to analysts’ reports by Haitong Securities and Shenwan Hongyuan Securities.

While bank lending held its ground, the latest reading of total social financing (TSF), a broad measure of credit and liquidity in the economy, is sending more worrying signals.

China’s TSF, which includes financing that exists outside the conventional bank lending system such as initial public offerings, loans from trust companies and bond sales, grew by a net 2.21 trillion yuan in September, up from 1.52 trillion yuan in August, central bank data showed.

But the increase was mainly due to a revised calculation in September to include in the TSF reading special-purpose bonds issued by local governments.

Beijing has called on local authorities to speed up the issuance of special-purpose bonds to fund specific types of construction projects, such as toll roads and subways, to encourage economic growth.

According to central bank data, local governments issued a net 738.9 billion yuan of special-purpose bonds in September, an increase of 487.2 billion yuan from a year earlier. If such issuance is excluded, the September TSF would decline to 1.47 trillion yuan, lower than the previous month and lower than a year ago.

According to a Shenwan Hongyuan report, while governments’ bond issuance rises, growth of corporate bond issuance slowed in September for the first time this year, indicating narrowing financing access in the bond market for corporations.

The slowdown in broad credit growth in September “is likely to trigger further policy easing over the coming months,” said Julian Evans-Pritchard, an analyst with research firm Capital Economics, in a note.

The monetary authority has cut the reserve requirement ratio for most commercial banks four times this year. The latest reduction, which took effect Monday, released more than $100 billion of additional liquidity into the banking system.

China’s outstanding M2, a broader measurement of the money supply that covers all cash in circulation plus deposits, grew 8.3% year-on-year at the end of September, inching up from 8.2% growth a month earlier and just off a record low of 8% in June, according to central bank data.

China is due to release a deluge of data on Friday, including third-quarter gross domestic product, fixed-asset investment for the first nine months of this year, and September retail sales and industrial output data.

The story was updated with analyst’s comments on the revised TSF calculation.