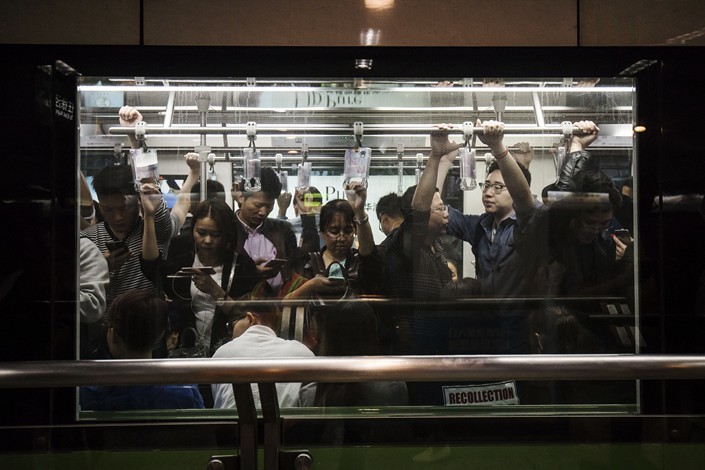 Passengers on a crowded Shanghai subway train focus on their phones on Oct. 13, 2017, Photo: VCG

Global tech giant Apple Inc.’s China revenue grew 16% in its latest reporting quarter on higher prices for its newer iPhones, as it continued battling to maintain its global market share in the face of aggressively expanding Chinese rivals, according to data released on Friday.

Apple’s Greater China revenue, which also includes Taiwan and Hong Kong, reached $11.4 billion in its latest reporting quarter through the end of September, according to its latest report. That growth rate was the slowest among the five major global regions that Apple breaks out, with worldwide revenue growth totaling 20%.

Greater China accounted for about 18% of Apple’s total revenue for the quarter.

But on a shipments basis, Apple reported its number of iPhones sold worldwide during the quarter was flat from a year earlier, indicating global revenue gains were largely due to higher prices. It did not provide quarterly shipment figures for Greater China.

That flat growth on a shipment basis was repeated in new global data released on Friday, which showed Apple shipped 46.9 million iPhones in the third quarter worldwide, up just slightly from the 46.7 million in the same quarter a year earlier, according to IDC. Despite that, Apple was able to boost its global market share to 13.2%, up 0.8 percentage points from a year earlier, as the global smartphone market contracted by 6%.

IDC said the Chinese market also contracted in the third quarter, though it didn’t provide specifics. That decline marked the sixth consecutive quarterly fall for the world’s largest smartphone market, which has become saturated due to rampant competition among a large number of players. Apple has been a victim of that competition, with its share of the market dropping to 6.7% in this year’s second quarter from 11% at the end of 2016.

“China’s domestic market continues to be challenged as overall consumer spending around smartphones has been down,” said IDC’s Ryan Reith. “High penetration levels, mixed with some challenging economic times, has slowed the world’s largest smartphone market. Despite this, we believe this market will begin to recover in 2019 and beyond, driven in the short term by a large, built-up refresh cycle across all segments, and in the outer years of the forecast supported by 5G migration.”

Meanwhile, Chinese players Huawei and Xiaomi continued to consolidate their places among the world’s top five smartphone brands, with each posting solid double-digit gains for the quarter. Huawei’s shipments grew 32.9% during the third quarter to give it 14.6% of the global market, behind only leader Samsung with 20.3% of the market, according to IDC. Xiaomi’s shipments grew 21.2% to take up 9.7% of the global market.

But fellow Chinese peer Oppo didn’t fare as well, with its sales dropping 2.1% to give it 8.4% of the market in the third quarter. That was enough to finish in fifth place among the top global brands.