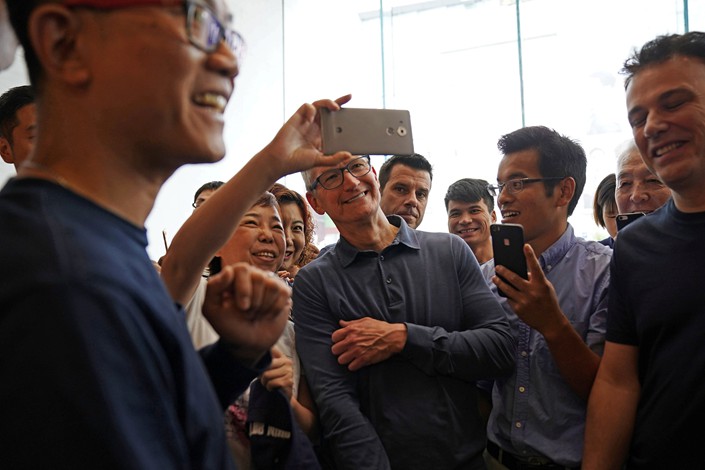 From visiting students at a middle school in Beijing, to crossing Shanghai’s Huangpu River on a ferry, and catching a yoga class where enthusiasts check their fitness on Apple watches, Tim Cook has so far had a busy week in China.

The Apple CEO is a frequent flyer to China to both monitor a market that is critical to the U.S. tech giant’s success and to undertake board director duties at Tsinghua University School of Economics and Management.

A source told Caixin on Thursday that the major purpose of Cook’s visit was to attend the Tsinghua board meeting. An Apple China  spokesperson refused to divulge other information, but the Shanghai government revealed Cook had met with officials.

Cook is visiting China at a time of amped-up tense relations between Beijing and Washington as the two economic powerhouses stay deadlocked in a rising trade conflict. Both parties have imposed tariffs on hundreds of billions of dollars’ worth of products since July.

Although Apple products have so far escaped the tit-for-tat tariff war, U.S. President Donald Trump last month said companies like Apple should shift their assembly plants out of China and back to the U.S.; Beijing, on the other hand, has openly urged U.S. corporate leaders to do more to pressure Washington in defense of their own interests and their operations in China.

Cook met with Shanghai top government official Li Qiang on Wednesday, a meeting the latter said in a statement (link in Chinese) demonstrated Shanghai’s willingness to enhance cooperation with innovative companies like Apple. The statement also stressed that it wanted Apple to “play a greater role” in facilitating ties between Shanghai and the U.S.

“It goes without saying how significant the China market is to Apple,” said Jia Mo, a Shanghai-based analyst at market research firm Canalys. If the trade conflict drags on, it may take a toll on Apple’s business in China, its largest market outside the U.S., he added.

In 2017, Apple generated $45 billion in revenue from Greater China, about 20% of its total annual sales.

Cook’s trip to China also coincides with lackluster sales of its latest model, the XS series, available here since late September and selling for as much as $1,850. Several authorized retailers told Caixin the steep prices have resulted in disappointing sales so far of the new iPhones.