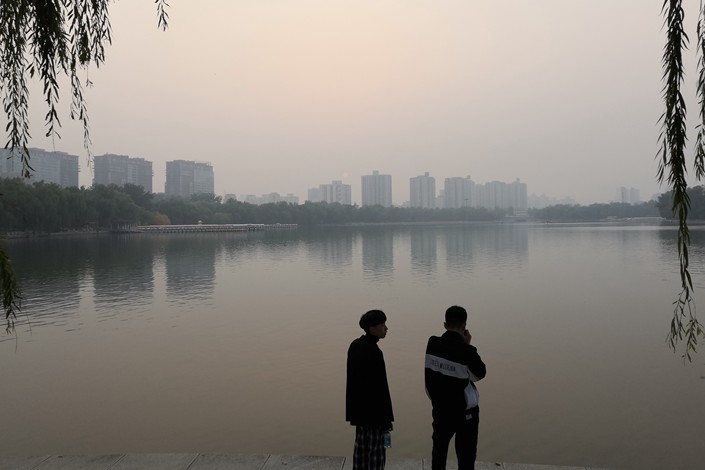 On Oct. 21, the Chinese capital and neighboring regions were blanketed in smog yet again. Photo: IC

China’s Ministry of Ecology and Environment (MEE) announced Wednesday that much of North China will see heavy smog this weekend, but was eager to deny reports that there had been any slackening of its anti-air pollution efforts.

Last month, the MEE announced that it had revised the pollution reduction targets for the Oct. 1 to March 30 period to 3%, down from 5% in draft plans released earlier this year. This is typically the smoggiest time of year. On Wednesday, MEE spokesman Liu Youbin denied media reports that the lower target reflected a relaxation in China’s fight against air pollution, saying that they were a “misunderstanding.”

Liu said that last year, the reduction target was met due to hard work and help from the weather. According to experts’ estimates, Liu said, favorable weather conditions accounted for about one third of the overall drop in PM2.5, or about 8.5% of the 25% target. “Under normal weather conditions, we must ensure that the air quality does not deteriorate year-on-year,” he said. Greenpeace analysts told Caixin that good weather could have accounted for as much as half of the improvement seen last year.

Air pollution is measured by the concentration of PM2.5, hazardous particulate matter under 2.5 micrometers per cubic meter. Major causes of PM2.5 include burning coal, emissions from heavy industry, and emissions from cars and trucks. Last year, the government banned the use of coal to heat homes in 28 cities in northern China and imposed strict production caps in order to curb air pollution.

After the announcement, some media outlets suggested that the target may have been revised in order to offset slowing economic growth caused in part by trade frictions with the United States, which Liu denied. Citing weather forecasts that indicate conditions may not be as favorable this winter, Liu said that “the task of hitting the 3% improvement target this autumn and winter will still be rather arduous.”

“While the regional air quality has significantly improved, the space for emissions reduction has narrowed,” Liu said, adding that optimizing infrastructure in industry, transportation, and land use is a long-term project in which results do not come overnight. “In the future it will be increasingly difficult to reduce one microgram,” he said.

On Monday, the MEE announced that a further 11 cities in Shanxi, Shaanxi, and Henan provinces would be required to switch from coal to natural gas for household heating supply, in addition to the 28 cities required to make the switch last year. The MEE also set a PM2.5 concentration reduction target at 4% for the October to March period for the 11 cities, which are known for their coal, coke and steel industries – and poor air quality.