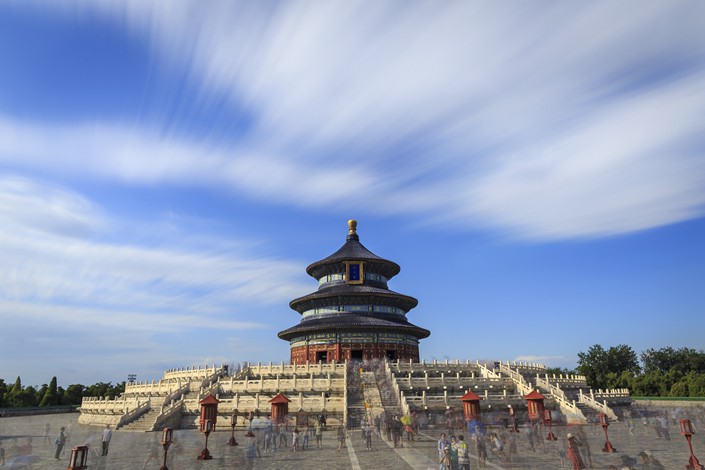 Beijing's iconic Temple of Heaven on Aug. 24, a day on which the capital city was not blanketed by smog. Photo: VCG

Air quality in China has improved slightly this year, according to data released Thursday by the country’s Ministry of Environment and Ecology.

In 338 cities surveyed by the ministry, air quality was “good”— producing an air quality index reading of below 100 — 81% of the time from January to September on average, up 1.3 percentage points from the same period last year, according to the official announcement.

Air quality in China is considered ‘excellent’ when the country’s air pollution index (API), weighted using six major pollutants including the amount of particulate matter with a diameter under 2.5 micrometers (PM2.5), is below 50. The API usually provides lower readings than the air quality index used in the U.S.

The ministry also released a ranking of the air quality in September of 169 cities, with Tangshan, China’s top steelmaking city located in Hebei province, coming in last. The bottom 10 also included Hebei capital Shijiazhuang and Jinan in Shandong province.

Neijiang, a city in Sichuan southeast of Chengdu, was found to have the best air quality in September, with Hainan’s capital Haikou and northern Heilongjiang provincial capital Harbin also ranking in the top 10.

The environment ministry more than doubled the number of cities included in the ranking in July, in a bid to pressure local authorities to increase efforts to clean up the air in their respective localities.

China had a record drop in polluted days in 2017, in part due to strict caps on factory emissions in “2+26” cities, which included Beijing, Tianjin, and cities in industry-heavy neighboring provinces Hebei, Heilongjiang, and Shanxi, according to Greenpeace data released early this year. The caps were in effect from October 2017 through the following March. The central government also introduced a ban on home coal use in a push to switch to liquid natural gas (LNG) for heating, resulting in a severe gas shortage and leaving rural residents shivering. The ban on coal was later reversed to allow residents to burn coal until they could be ensured access to LNG.

In late September, the environment ministry removed blanket production cuts on heavy industry this winter and asked local governments to determine region-appropriate production cuts. The ministry also lowered the pollution reduction target to 3%, signaling that anti-pollution requirements will be less stringent than last year. The target in 2017 was 15%.

About half of the exceptional 25% reduction in air pollution last winter was due to favorable weather conditions, according to Lauri Myllyvirta, an energy analyst at Greenpeace. He estimates that, were it not for the weather, last year’s PM2.5 levels would not have met the 15% target.

“If conditions this winter are more average, PM2.5 levels would likely increase by around 10% even if all the emissions reductions implemented last winter are put in place,” he said. “That’s why I say the 3% target is in fact a tough one.