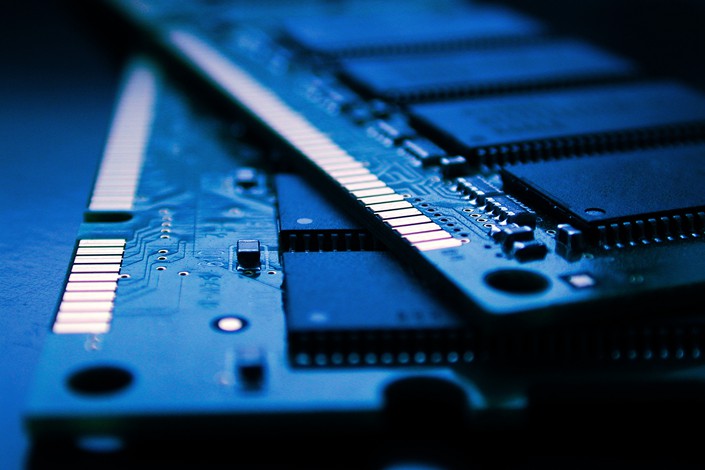 Fujian Jinhua Integrated Circuit Co. Ltd. said over the weekend that it “has never acted to steal another firm’s technology.” Photo: VCG

Jinhua’s weekend remarks are the latest twist in an escalating dispute over intellectual property between companies from the world’s two largest economies. They come as the U.S. and China are engaged in a trade war, with intellectual property theft by Chinese companies from their U.S. peers as one of the central complaints of U.S. President Donald Trump.

The Justice Department unsealed an indictment on Thursday against Jinhua, its Taiwan-based partner United Microelectronics Corp. (UMC), and three UMC employees who once worked for a Micron subsidiary. It accused them of stealing trade secrets from Micron, one of the world’s top makers of memory chips, related to the design, development and manufacture of DRAM memory.

In concert with that indictment, Washington last week also banned exports of U.S.-made products to Jinhua, cutting it off from those suppliers.

Jinhua had remained silent until the weekend, but broke that silence with a brief statement saying it “attaches great importance to the protection of intellectual property rights.”

“Jinhua has never acted to steal another firm’s technology,” it said in a statement (link in Chinese) on Saturday. “Micron regards the development of Jinhua as a threat and has adopted various means to prevent and damage Jinhua’s development.”

The feud between the pair started in December 2017, when Micron sued Jinhua in the U.S. for stealing trade secrets. Jinhua later countersued Micron in China, and a court in the southern Chinese city of Fuzhou later sided with the Chinese company and blocked the sale of some of Micron’s chips in China.

Jinhua said it “resolutely safeguards the legitimate rights and interests of (our) enterprise,” and requested that the U.S. and Micron “immediately stop their wrong practices.”

State-back Jinhua is helping to support Beijing’s “Made in China 2025” plan, which aims to upgrade China’s manufacturing sectors to be more globally competitive, especially in high-value-added areas like microchips.