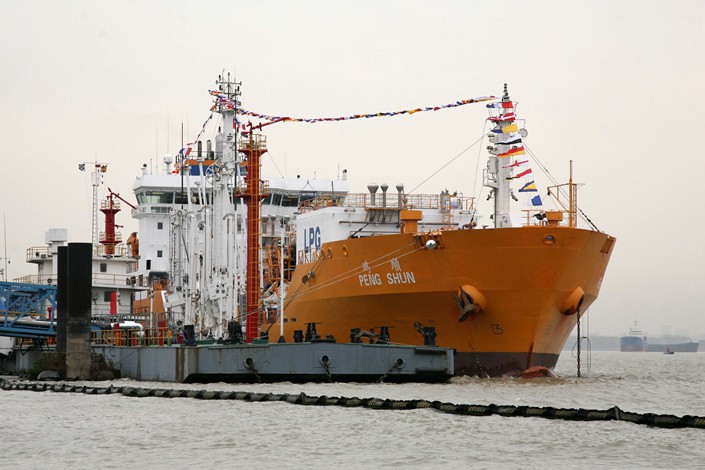 A freighter docks in Nanjing, Jiangsu province in 2010. Photo: IC

The Shanghai Stock Exchange has given a state-owned tanker company approval to relist, marking the first time a delisted company has ever been allowed to return to the Chinese mainland market.

The relisting of Nanjing Tanker Corp. may bolster confidence in the health of the domestic stock markets as it demonstrates that a booted company can get back on an exchange once it gets its finances in order. However, the case has also sparked concerns that it will encourage investors to speculate on delisted shell companies, now that they know it is possible to return to the markets.

Nanjing Tanker, the oil transportation arm of Sinotrans & CSC Holdings Co. Ltd., gained approval to relist four years after it got kicked off the exchange, according to a statement from the Shanghai Stock Exchange on Friday.

Founded in 1993 and listed in 1997, Nanjing Tanker was forced to delist in 2014 after it reported losses for four straight years amid a slowdown in the global tanker market. It was the first time a state-owned enterprise had been dropped from a domestic stock exchange.

Since then, the once-indebted company has undergone a major restructuring of its debts and assets. For example, it transferred some of its oil freighters to a shipping company jointly owned by its parent and port operator China Merchants Group Ltd., which helped it to trim its debt by 2.4 billion yuan ($348 million).

Following the restructuring, Nanjing Tanker focused on businesses with more stable profits, such as chemical tanker shipping. For the years 2015, 2016 and 2017, it reported net profits of 628 million yuan, 560 million yuan and 411 million yuan, respectively. As of September, the company had net assets of 3.6 billion yuan, according to its third-quarter financial report.

The relisting rules — somewhat counter-intuitively — make it easier for companies to delist because they know there is a road to return, according to Wang Jiyue (link in Chinese), a former deputy at a securities firm. And delisting is important because it helps remove failing companies from the market. “This makes the market healthier,” he said.

However, the case might also have the adverse effect of encouraging speculation on shell company stocks, as some investors might interpret the case as opening the door to the relisting of all manner of companies, said an analyst from a Shanghai brokerage, who preferred to stay anonymous.

In fact, regulators have introduced tougher rules to clean up the country’s equity markets, potentially leading to more companies being delisted as part of the campaign. More than 3,500 companies are listed on China’s two stock exchanges, but there have been very few delistings. Only eight firms have been dropped from the exchanges since 2012, six of which were delisted because they failed to turn a profit after three consecutive years of losses.

The Shanghai Stock Exchange, however, said that it will further reinforce the delisting policies as it proceeds with the relisting procedure for Nanjing Tanker, according to a statement on its website.