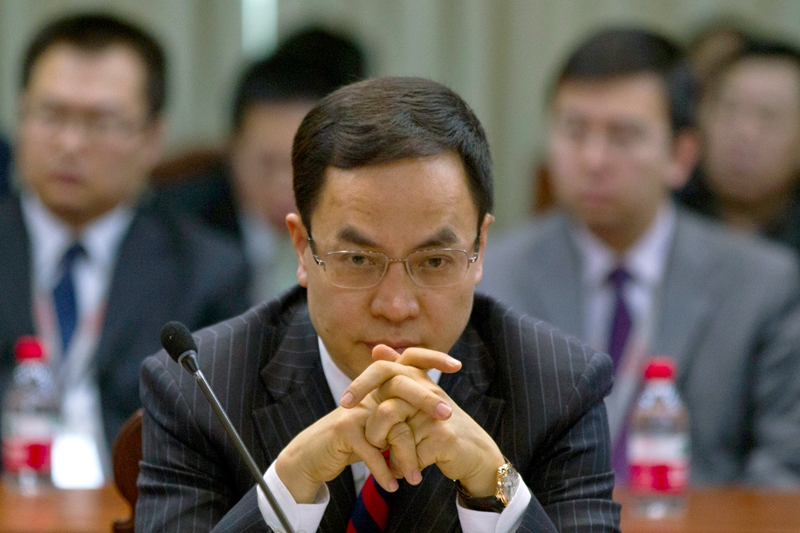 Hanergy Thin Film Power Group Ltd. is stirring the market again with a proposal to buy out its frozen shares for HK$55 billion ($7 billion). It’s not clear where the money for such a buyout would come from.

Shares of the Chinese solar power equipment maker have been suspended in Hong Kong for more than three years. The stock went on ice after a spectacular plunge of 47% one morning in May 2015, after which Hong Kong regulators imposed conditions for trading to resume that they say Hanergy has never met.

Now Hanergy founder Li Hejun is talking about relisting the company on the mainland after a privatization, a plan he outlined last week in comments to media. Li was the Chinese mainland's wealthiest man before losing about $14 billion of his personal fortune in the May 2015 Hanergy debacle.

While privatization would end a years-long standoff between Hanergy and Hong Kong regulators, relisting on China’s A-share market may be a remote goal unless the company can solve deep-rooted problems that concern regulators, analysts said. In the past three years, the company has done little to resolve doubts about the viability of its heavy reliance on sales to affiliated companies and receivables to boost revenue, analysts said.

The company is under mounting pressure over its frozen shares, analysts said. Under recently revised rules of the Hong Kong bourse, shares suspended more than 12 months must seek resumption by next July 31 or face delisting.

In a filing Thursday night, Hanergy said its controlling shareholder, Hanergy Mobile Energy Holding Group Ltd. (Hanergy Mobile) will pay no less than HK$5 for each of Hanergy’s shares to take the company private. The offer represents a 28% premium over Hanergy’s last-traded share price of HK$3.91.

Hanergy cited “market changes and business needs” as the reasons for going private. The deal, which involves 26.04% of Hanergy’s outstanding shares held by public investors, could total HK$54.9 billion, according to the filing.

Hanergy and Hanergy Mobile are both ultimately controlled by Li. He holds 98.57% of Hanergy Mobile and 73.96% of the listed unit through affiliated parties, according to company reports.

In August, Hanergy said it fulfilled all the conditions set by Hong Kong regulators to resume stock trading, including ousting Li from its board and cutting debt and business links with the parent company Hanergy Holding Group. Late last year, Hanergy Holding reduced its stake in the listed unit from 73% to 24.5% while another subsidiary, Hanergy Mobile, became the largest shareholder of Hanergy with 47.8%.

The moves apparently haven’t satisfied Hong Kong securities regulators as they have yet to clear the stock to resume trading, Caixin learned. The Hong Kong Securities & Futures Commission (SFC) declined Caixin’s requests to comment on Hanergy.

“The longer (it waits), the riskier it is,” said a Hong Kong stock analyst.

The May 2015 Hanergy share collapse that preceded the long-running trading halt was triggered by investor concerns about the company’s debt overhang and unusual stock movements. Before the plunge, Hanergy’s shares enjoyed a seemingly unstoppable surge, rising tenfold from 2013 to early 2015 and pushing its valuation above $40 billion.


A subsequent investigation by the SFC led to a rare order blocking Hanergy from resuming trading without regulators’ approval. Last year, a Hong Kong court ruled that Li and four other directors were involved in misconduct such as misleading shareholders. Li was banned from being a director of any company in Hong Kong for eight years.

Established in 1994 as a hydropower producer, Hanergy shifted its business focus to thin film solar modules in 2009 and quickly expanded its business to the entire industrial chain. Thin-film modules are light or flexible solar energy strips that can be mounted on roofs, walls or consumer goods.

More than 70% of Hanergy’s revenue came from solar panel manufacturing equipment, mainly sold to industrial parks controlled by affiliated companies. The complexes of factories supposedly produced solar panels or other energy products. Hanergy was almost the sole customer of products produced by those parks, a former Hanergy Holding executive said.

“Selling the equipment to industrial parks creates receivables to the listed unit. But it is very likely that there are no actual sales of products as most of the parks are not in actual operation,” the executive said. “It’s only for making the books.”

Despite the freeze on its share trading, Hanergy has pushed since late 2016 for a new round of expansion by signing agreements with more than 10 local authorities to build solar energy industrial parks. Caixin estimated that since 2009, Hanergy has announced plans to build industrial parks with annual solar-cell production capacity totaling 26 gigawatts. That much capacity would work out to about 50 times China’s average annual production of solar cells between 2013 and 2017, according to data from China Insights Consultancy.

In the first half this year, Hanergy outperformed the industry by posting 615% growth in unaudited revenue to HK$20 billion. Net profit surged to HK$7.3 billion from last year’s HK$245 million. By the end of June, Hanergy’s accounts receivable more than doubled from a year ago to HK$22.6 billion.

Since 2015, Hanergy has launched a series of reorganizations and pledged measures to address concerns over its connected-party transactions. By the end of 2017, parent Hanergy Holding transferred its control of the listed unit to newly established Hanergy Mobile and said it would refocus on hydropower and wind farms.

There are some apparent changes. Most of the new solar energy industrial parks announced since 2016 are majority-controlled by investment funds backed by local governments or their investment vehicles, according to public information. But tracking the origin of the funds still shows links to Hanergy.


For instance, a project in Yingkou, Shandong Province, received 1.4 billion yuan of investments from its biggest shareholder, backed by the local government. But Hanergy promised to buy back half of the stake from the investor in seven years.

In other projects, Hanergy’s executives or associates of Li appeared as major shareholders or senior managers.

The SFC declined to respond to Caixin’s questions on whether such arrangements are still seen as connected-party transactions.

An internal document seen by Caixin indicated that Hanergy Holding and its affiliates are still the second largest customers of the listed unit in 2017.

After Hanergy unveiled its expensive privatization plan, questions swirled about how the company and its owners would pay for it.

Since the 2015 sell-off, the parent Hanergy Holding has faced rising debt disputes with state lenders, suppliers and contractors involved in its massive industrial park projects.

Data from the Supreme Court showed that as of Oct. 29, there were eight unpaid debt cases pending against Hanergy Holding. A court verdict in June said there were no assets among Hanergy Holding’s accounts could be sold to pay the debt, and the company was listed as a defaulter.

In July, media reported that Hanergy Holding mandated that all employees pay at least 200,000 yuan to invest in an asset management product that raised funds to finance the company’s industrial park project in Yingkou, reflecting the financial strain.


A Hanergy Holding executive denied that the payments were compulsory and said the company was only assisting in sales of the investment product. But several employees told Caixin that they believed those who didn’t buy the product would lose their jobs.

Hanergy expects to expand the application of its thin film products to households and offices to generate new growth, but the efforts have faced challenges due to high costs, analysts said. The company has equipped office buildings for Ikea, State Power Investment Corp. and FAW-Volkswagen Automobile Co. with solar films as new energy sources.

But experts said the projects are more demonstrative than commercial as the application of building-integrated photovoltaic systems is still not ready for massive use.

A main cash cow of Hanergy Holding is the Jinanqiao Hydropower Station in southwest Yunnan province, which started operation in 2012 with annual capacity of 3 million kilowatts. The station has registered annual revenue of about 3 billion yuan and around 700 million yuan of net profits, company documents showed.

But the station has been repeatedly pledged for loans, Caixin learned. Court documents and verdicts showed that the Jinanqiao station has been pledged as collateral by Hanergy Holding for multiple loans totaling more than 14 billion yuan ― or almost five times annual revenue ― from banks including China Development Bank (CDB), Agricultural Bank of China, China Construction Bank and Bank of China.

A source at CDB, one of the main credit backers of Hanergy, said the bank is still optimistic about solar energy and believes Hanergy will resume trading as early as next year.

Founder Li also shows undimmed optimism. He often compares his company to tech giants like Apple Inc. and Google Inc., setting an ambitious goal for Hanergy to post 200 billion in revenue with an overall valuation of 1 trillion yuan by the end of 2019.

This story has been updated to clarify that Li was the Chinese mainland's wealthiest man before losing about $14 billion of his personal fortune in May 2015.