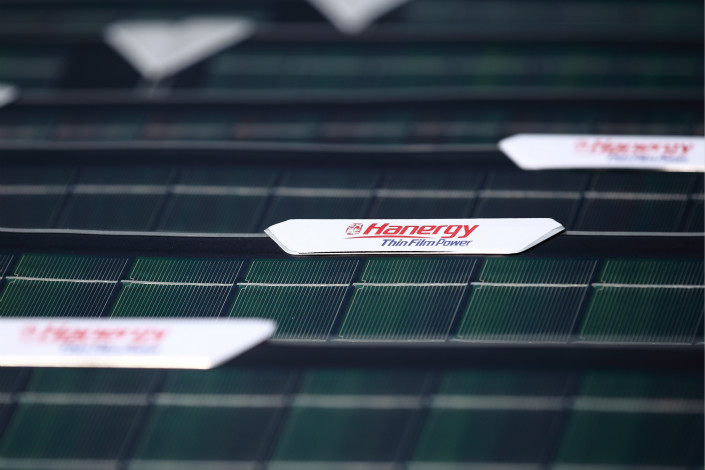 Embattled renewable-energy firm Hanergy Thin Film Power Group Ltd. has fulfilled a key condition to resume trading, which could end a nearly three-year suspension after the rapid rise and subsequent crash of its Hong Kong-listed stock.

Hanergy saw its stock surge in 2015 before suddenly reversing course, triggering an investigation by the securities regulator and suspension of its shares. The solar power equipment-maker recently submitted a disclosure document to the Hong Kong Securities and Futures Commission (SFC), fulfilling the second of two conditions for a resumption of trade, the company said in a stock exchange filing Wednesday.

The first condition, which the SFC announced in January 2017, required Hanergy’s parent, Hanergy Holding Group Co., to disqualify founder and controlling stakeholder Li Hejun and four directors from the company board for at least 15 years. Hanergy said Wednesday that it had fulfilled that requirement in September.

Hanergy is now waiting for the SFC’s approval to resume trading of its shares, which was halted after they plunged 47% in a single morning in 2015.

Li, who founded Hanergy in 1994, was China’s richest man at one point. The company, which also has business in the hydropower and wind power industries, saw its shares skyrocket in the two years before the crash, rising tenfold from 2013 to early 2015.

But then on May 20, 2015, a massive sell-off wiped out nearly half of the company’s market value within the first 70 minutes of trading amid concerns of stock manipulation and worries that Hanergy would be unable to pay off its debts.

The huge gains and dramatic fall made global headlines as observers tried to explain the story. Some lauded the company for its strong position in a cutting-edge industry earmarked by China for major development, while others attributed the rapid rise to manipulation.

Hanergy, which was forced to suspend trading indefinitely, later blamed the crash on speculation over the cancellation of a contract with one of its clients, Baota Petrochemical Group.

Hong Kong’s securities regulator began an investigation into the company soon after the crash. Hanergy was later removed from the Shanghai-Hong Kong Stock Connect program, where it had been one of the most popular stocks for mainland investors looking to invest in Hong Kong-listed companies.

Since its suspension, Hanergy has paid off more than a third of its HK$4.9 billion ($624 million) in secured debt ahead of schedule, the company said in its announcement on Wednesday. It has also diversified its income, which has “reaped satisfactory results in both upstream and downstream businesses,” Hanergy said.