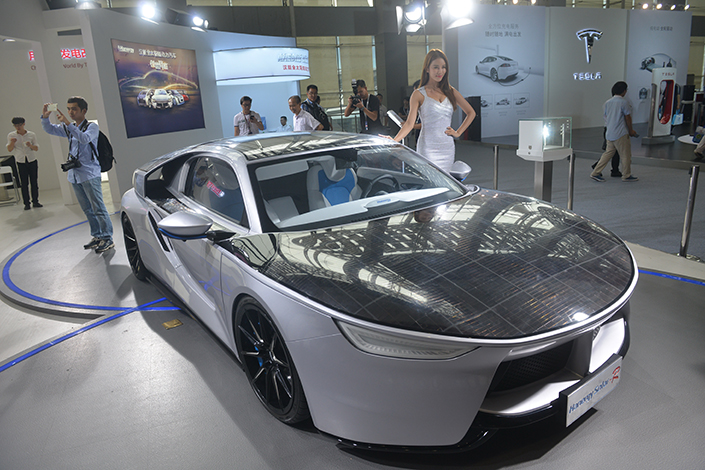 In signing a memorandum of understanding at Hanergy’s headquarters in Beijing, the companies said their venture will mark the first step toward long-term cooperation in research and development.

Initially, the solar roof is expected to generate enough energy to power peripheral functions such air conditioning and seat heaters. The aim will be to improve the vehicle’s gas mileage. Later, the solar system could be improved to power the car’s battery.

A prototype car with an integrated roof is expected to be available by the end of the year, the companies said. They did not offer a timetable for possible mass production, nor disclose the project’s financial details.

The deal offered a long-awaited boost for Hanergy, a private maker of solar panels and film that’s been riding a reputation roller coaster for the past three years.

The stock’s value surged in 2015, climbing to more than 10 times its 2013 value. But in a single morning, the high flying stock lost 47% of its value, prompting a trading halt. The shares are still at a standstill as the stock plummet prompted bourse regulators to investigate.

Hanergy has not said when it might resume share trading, although the stock is no longer accessible through the Shanghai-Hong Kong Stock Connect program.

Yet Hanergy as a solar company still has ambitions to develop thin-film solar cell technology, and wants to instill hope for new ventures among investors.

Li Hujun, the company’s founder, has been lobbying for government funding to bolster research and support for solar powered cars. In July, Hanergy rolled out four homegrown solar-powered vehicles it says can be easily charged and fully commercialized.

Meanwhile, Volkswagen has shown a determination to pivot toward zero-emissions vehicles. In June, the company announced its “Strategy 2025” program with the goal of annual sales of 1 million electric and hybrid vehicles globally starting that year.

Volkswagen has made progress by, for example, receiving partial approval for a 5 billion yuan ($751 million) electric-vehicle joint venture with Anhui Jianghuai Automobile (JAC). JAC has been making cars since 2007 after years as a state-owned manufacturer of heavy equipment and commercial trucks.

Audi said it plans to release at least one electric model per year starting in 2018, starting with the E-tron Quattro all-electric.