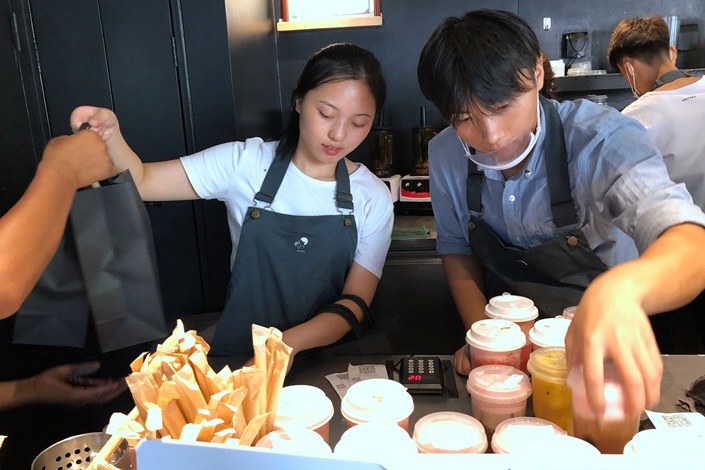 A gauge of activity in China’s services industries dipped to its lowest level in 13 months in October, a Caixin survey showed Monday, adding to evidence that the world’s second-largest economy is still facing headwinds from an ongoing trade war with the U.S.

The Caixin China General Services Business Activity Index, which provides a snapshot of operating conditions in the country’s services sector, dropped to 50.8 in October from September’s 53.1, marking its lowest level since September 2017. A reading of 50 separates expansion from contraction. The larger the number above 50, the faster the expansion, while the further below 50, the greater the contraction.

Washington has imposed additional tariffs on $250 billion worth of Chinese imports since July, while Beijing has retaliated with new levies on $110 billion of U.S. goods. Overall, each side has imposed charges on half of its annual imports from the other. The U.S. has been threatening to slap tariffs on all Chinese exports to the country, which could drag down China’s economic growth if they become a reality.

The services sector, which includes finance, real estate services, marketing, transportation and retailing, accounts for more than half of China’s gross domestic product, according to government data.

The gauge of new business placed with services providers in October dipped to its lowest level since November 2008, despite staying in expansionary territory, according to Monday’s survey report. “A number of service providers commented on relatively subdued demand conditions,” the survey said.

The gauge of business expectations, which indicates services firms’ confidence in the business outlook for the coming year, slipped to a three-month low in October, despite remaining in positive territory.

The good news was that the gauge of employment returned to positive territory, just off a 30-month low in September, indicating more companies were hiring workers than shedding them. The amount of unfinished work at services firms declined for the second straight month in October, with some reporting greater efforts to clear backlogs, according to the survey.