Editorial: How to Encourage Market Confidence 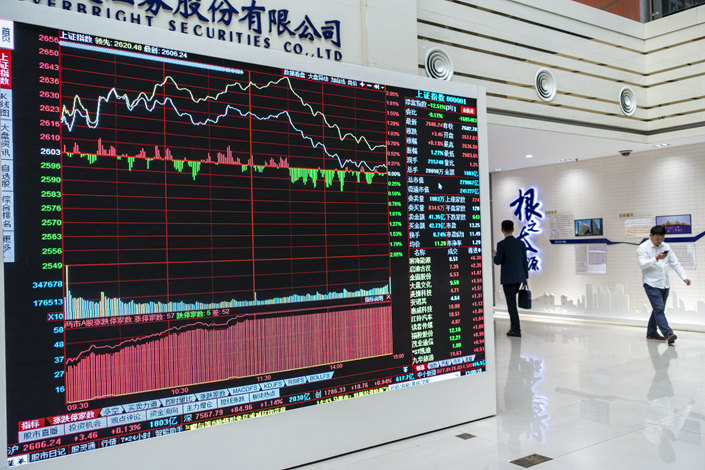 We still can’t really call the Chinese stock market the “economy’s barometer,” but we can call it a “confidence barometer.” The recent severe stock market index fluctuations have attracted close attention and caused widespread concern. A few days ago, the Communist Party’s Politburo meeting called for reforms focusing on the capital market, including strengthening system construction, stimulating market vitality, and promoting healthy, long-term development of the capital market. On Thursday, President Xi Jinping told a symposium on private enterprises, “I want to give all of you confidence.” This measure will certainly help stabilize employment, the financial market, foreign trade, foreign and domestic investment and expectations. Since most listed companies are private enterprises, the statement will naturally also help stock indexes stabilize.

The factors influencing people’s expectations of the Chinese economy, and in turn affecting stock indexes, are complicated and multilayered. The direct reason for the recent major fall in stock indexes is the sell-off of pledged shares, reflecting the extremely tight liquidity situation of listed companies. This is closely related to the long-term problem of expensive and difficult financing for private enterprises, amplified by the current downward pressure on the Chinese economy. Policies can be changed to relieve short-term difficulties. However, in order to achieve long-term results, it is still necessary for China to firmly promote institutional reforms and ensure that the principle of “competitive neutrality” is implemented. Stimulating capital market vitality will also require the extensive development of the capital market and financial market systems.

From this vantage point, we can more deeply consider and evaluate securities regulators’ response to the recent stock index slide. The most striking measure was the China Securities Regulatory Commission’s (CSRC) Oct. 30 statement calling for a “reduction in unnecessary interference in the trading process, so that the market has clear expectations for regulation and investors have the opportunity to treated fairly.” The question of what makes intervention “necessary” or “unnecessary” is, naturally, related to how one defines “intervention.” If we look at general involvement, some intervention is obviously necessary. But intervention specifically regulating supply and demand, stimulating indexes or introducing sand into the trading machine during a bull market will only cause market distortions and hinder success. Sooner or later, market forces will show their strength. For example, regulators previously placed strict controls on share pledging, but listed companies’ thirst for liquidity could not be curbed, forcing regulators to eventually loosen policy.

The securities market is essentially an incomplete market with high information asymmetry. Regulators are, to a large extent, responsible for reducing this information asymmetry to keep the market transparent, impartial and equitable. It is regulators’ job to strictly inspect and punish the release of false information, financial fraud, insider trading and other illegal behavior. Strictly regulating and continuing to strengthen information disclosure by listed companies, a major focus of regulators in developed countries, has also long been a major task for the reform of China’s securities regulators, and will require years of effort.

It should be acknowledged that unnecessary intervention by securities regulators doesn’t just take place within the trading process. The initial public offering approval process has long been criticized. Strengthening corporate governance of listed companies is indeed an unshirkable responsibility for regulators, but the quality of listed companies cannot be guaranteed purely through the approval process and other similar processes. Besides, when it comes to market competitiveness, companies that are successful today could still fail tomorrow. Regulators should respond to public demands and accelerate reform, replacing the authorization-based listing mechanism with a registration-based one, and shifting from prelisting scrutiny to strengthening supervision during and after the listing process. In terms of concrete issues like listed companies engaging in share buybacks or acquisitions and reorganizations, the market’s expectations can be stabilized only if policies are stabilized. When it comes to the issue of removing information asymmetry in the securities market, market intermediary organizations and mass media can play a larger role, and there is no need for the regulatory departments to oversee every detail.

The Chinese stock market experiences too much, rather than too little, regulatory intervention. Many problems do not stem from market failure, but rather from self-contradictory, unpredictable intervention. One can imagine what the result will be if we misdiagnose the problem and attempt to solve it by increasing intervention. The CSRC’s recent call to reduce “unnecessary intervention” is an implicit acknowledgment of the problems that excessive intervention has caused. Previous rules on lowering the holdings of major shareholders were too strict. What’s more, setting up an excessive number of administrative approval gateways enables rent-seeking and breeds serious corruption. Regulators must learn from the corruption cases of former CSRC Vice Chairman Yao Gang and former CSRC senior official Li Zhiling.

Many people have defended regulatory intervention by arguing that China’s unique situation and its market development remain unsound. At the same time, they have also reminded regulators to grasp the appropriate “scale” of intervention, and pay attention to “balance.” Actually, the key is to clarify the boundary between regulators and the market. When the market mechanism can function completely normally, regulators will no longer need to offer guidance. Grasping “appropriateness” and “balance” is easier said than done, and is often beyond human ability.

Problems should be solved on the level at which they occur. As the stock market plummeted, many listed companies were forced to sell off the stocks they had previously pledged in order to obtain liquidity. This is a problem caused by structural and cyclical macroeconomic factors, and securities regulators are unable to control these. The Politburo’s unprecedented discussion of the problem of capital market development at its recent meeting also proves this point.

Recently, some market participants have been eager to seize every opportunity to ask for a market rescue. As everyone knows, the premise of market rescue is the possibility of systemic risk. The macroeconomic impact of the A-share market is clearly not enough to cause real systemic risks. Organizing capital to pull up stock indexes will not keep the market from falling into a reverse spiral. Unpredictably changing policies will also not benefit the market’s long-term stability. To truly fill the capital market with long-term confidence, authorities should engage in reforms that push for marketization and the rule of law. As Xi said at the symposium, China’s economy will “certainly be able to accelerate its transition to a high-quality development track” if it “comprehensively deepens reform and opening-up, with a focus on supply-side structural reform.” Reform and development should also be seen in the same way when it comes to the capital market.