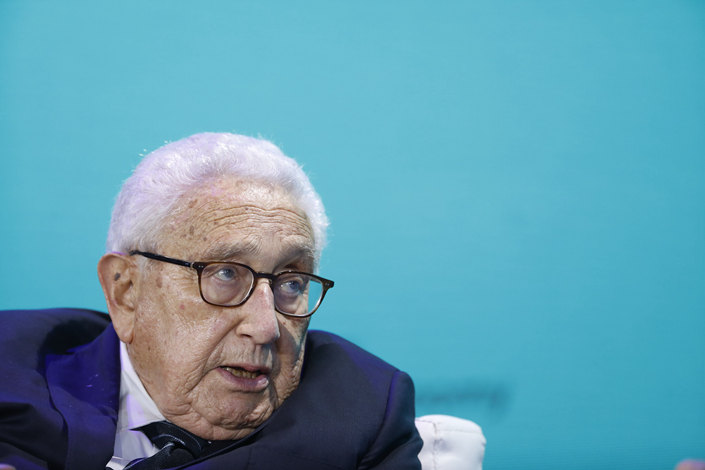 (Singapore) — China and the U.S. must agree to keep conflict between them under control, or risk “destroying hopes for the world order,” former U.S. Secretary of State Henry Kissinger said.

Kissinger’s remarks come ahead of his Wednesday trip to Beijing, where he is expected to meet Chinese leaders to discuss U.S.-China relations, Caixin learned. Representatives from the U.S. and China will also hold a high-level security dialogue on Friday, after months marked by trade war, heated rhetoric and military standoffs in the South China Sea. U.S. President Donald Trump and Chinese President Xi Jinping are expected to meet at the G-20 summit in late November.

Speaking at the Bloomberg New Economy Forum in Singapore Tuesday, Kissinger said he was optimistic that such a consensus could be reached, although there is indeed a group of people within the U.S. who wish to thwart China’s rise.

But the process will require adjustments from both powers, he added. China must learn that the evolution of the world’s power balance “cannot be forced,” while the U.S. must understand that “not every crisis is caused by ill will,” Kissinger said. “Not every disagreement with us is a lack of understanding.”

Kissinger played a key role in the thawing of U.S.-China relations in the 1970s, famously making a secret visit to China in 1971 to negotiate the details of President Nixon’s historic visit to the country the following year.

Back then, “we were not so much trying to make a deal,” but rather “concentrated on explaining each other’s thinking to each other sufficiently,” he said. Now, it remains “essential for China and United States to explain to each other what the objectives are that they feel they must achieve, and what the concessions are that they must not be asked to make,” as well as the “concessions that each is willing to make,” said Kissinger, who also exchanged words with Chinese Vice President Wang Qishan at the Bloomberg forum.

But much has changed since Nixon’s visit, with China in recent decades becoming a significant rival to the U.S. “That, independent of the attitudes of the governments, was going to create new problems,” he said.

At the same forum, Vice President Wang said China would push for a “mutually acceptable” resolution to the trade conflict with the U.S. and called for countries to “abandon the Cold War mentality and the mindset of power politics.”

This story has been corrected to remove a mistakenly inserted word in the headline and first Kissinger quote.