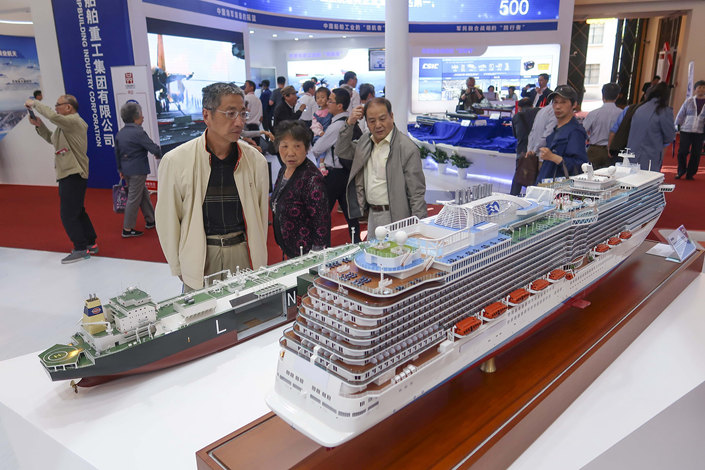 Attendees at the China Independent Brand Expo check out a model of a luxury cruise ship in Shanghai on May 10. Photo: VCG

China State Shipbuilding Corp. (CSSC) has sealed a deal worth as much as $4.6 billion to build up to six cruise liners for U.S. leisure travel giant Carnival Corp., as both companies gear up to tap the country’s thriving cruise market.

Under the deal, a recently formed Carnival-CSSC China venture will place orders for two cruise ships to be built by Shanghai Waigaoqiao Shipbuilding Co. Ltd., a CSSC subsidiary, the state-owned shipbuilder said in a filing (link in Chinese) to the Shanghai Stock Exchange on Tuesday.

The two cruise ships are planned for delivery by 2024, each worth $770 million. The agreement also gives the venture an option to order four additional cruise ships, pushing the deal’s total potential value to $4.6 billion. The ships will serve China’s cruise market, which has been thriving in recent years.

In 2017, a total of 4.96 million outbound trips from China were made through cruises, an 8% increase year-on-year, according to data from the government-backed China Transportation Association.

These developments were announced by the three parties during a signing ceremony at the first China International Import Expo in Shanghai Tuesday.

"It is a strategic decision for CSSC to enter into the cruise industry in partnership with Carnival Corporation and Fincantieri," Lei Fanpei, chairman of CSSC, was quoted as saying in a statement from Carnival. "Through the partnership with leading international enterprises, we will build a whole industrial chain including the cruise ship design and building, operations and supply chain.”

CSSC, China’s largest shipbuilder, has long aimed to break into the cruise building sector, an area dominated by European behemoths Fincantieri, Germany’s Meyer Werft, and France’s Chantiers de l’Atlantique. Of the total 99 cruise orders made by operators globally in 2017, the three companies had around 80%, according to the Cruise Industry News.

“As a large, embryonic and underpenetrated cruise market with continued long-term projections for outbound tourism growth, China represents a significant opportunity for the cruise industry,” Carnival said in the statement.

The Carnival-CSSC venture also announced that it will purchase two existing ships from Costa Group, another Carnival cruise operator unit outside China. This could bring its total fleet in the country to as much as ten by 2029.