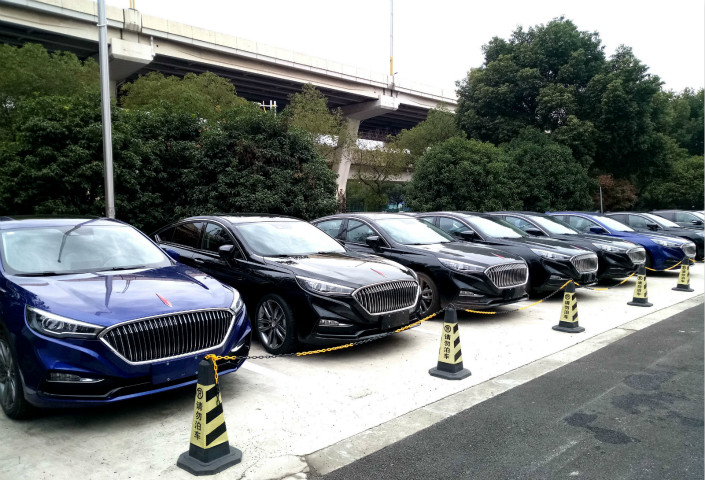 Hongqi brand cars for sale on a lot in Shanghai. Photo: VCG

(Bloomberg) — Car sales in China declined for a fifth consecutive month, bringing the world’s largest market closer to its first annual drop in at least two decades and piling pressure on carmakers that have relied on the country for growth.

This ups the pressure on automakers already pinning flagging profits and weaker sales growth on the pullback in China. Even Volkswagen AG, the top carmaker by sales volume there, cut its China forecast as the trade war hits the economy and demand for big-ticket consumer items like cars. A slump in China — where automakers poured in billions of dollars in the past 20 years to bulk up factories — leaves the industry struggling to find growth anywhere on the planet. Sales in the U.S. and Europe are waning as the rising popularity of car-sharing and ride-hailing services is reducing the need for individuals to buy vehicles. The slowdown coincides with China’s new emission rules that force carmakers to boost spending on electrified vehicles to avoid penalties. Spending requirements are further exacerbated by a seismic shift in the industry toward self-driving features and fully autonomous cars.

Total vehicle sales this year will remain under 30 million units and could drop from 2017, Wu Wei, a National Development and Reform Commission official, said Wednesday. Deliveries of vehicles to dealerships amounted to 28.9 million units last year, rising 3% from 2016. To stimulate demand, China’s top economic planning body has submitted a proposal to halve the tax on purchases of vehicles with engines no bigger than 1.6 liters, people familiar with the matter said last month. No decision has been made, they said. Toyota Motor Corp. and Daimler are among the few companies that have managed to maintain sales growth in China this year, helped by demand for sport utility vehicles and premium autos such as Toyota’s Lexus line.