By Zhang Erchi and Shen Lu 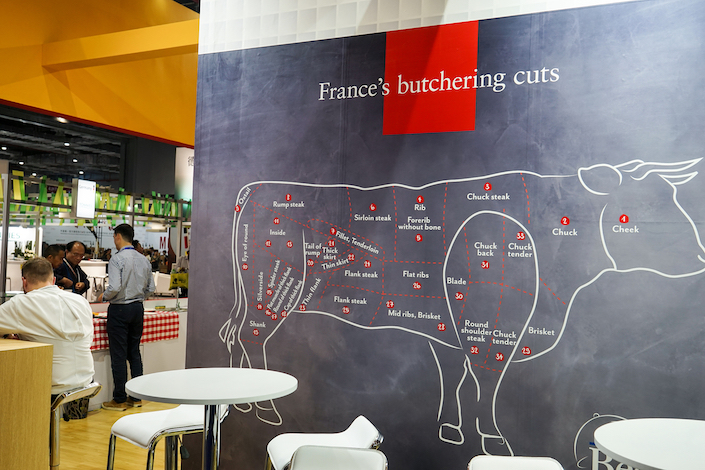 French beef made its formal return to China after a 17-year ban as a batch of high-quality, free-range meat was flown directly to the tasting tables of the Shanghai International Import Expo.

China’s embargo on French beef dated back to 2001, after the mad-cow disease crisis hit Europe. Beef products from countries including the United Kingdom, Germany, Italy and Ireland were also barred.

China lifted the ban on Ireland, the Netherlands and Denmark in following years and agreed to do so for France during French President Macron Emmanuel’s visit to China in January. The two countries agreed to remove the ban in six months and did so last June.

At an event during the Shanghai expo promoting French beef, France’s Agricultural Minister Didier Guillaume said he expected China to open its gates wider to France’s meat products following the end of the beef ban.

China, the world’s largest consumer market, is showing a growing appetite for imported food products as the country’s middle-class population expands. Beef imports to China increased by 46.8% in the first three quarters this year, according to China’s General Administration of Customs. Major exporters are from Australia, Argentina, Uruguay and the U.S.

In June, during French Prime Minister Edouard Philippe’s visit to China, the two countries signed an agreement that would effectively allow France to export beef to China. Since then, two French slaughterhouses have obtained access to China — Bigard Group, the largest beef-processing company in Europe, and Elivia, a subsidiary of Terrena SARL. Five other French companies have passed the official review and are awaiting licenses, Caixin learned.

To test the waters in China, Elivia flew 1 ton of high-quality beef from Western France to Shanghai and Beijing, said Li Yi, who oversees the company’s business development in China. Elivia’s products will soon be available on the online shopping platform of Alibaba Group Holding Ltd., Li said.

France is the world’s eighth-largest beef producer, according to data provided by the French government. In 2017, the country produced 1.5 million tons of beef, of which 16% was exported.

The consulting group McKinsey forecasts that China will require an additional 250,000 tons of imported beef a year 2025 — a 40% increase from 2015.

“Because the consumption of beef in the French domestic market is declining year by year, the development of external markets, especially China's huge market, is strategic," Li said.

The potential market in China is huge. According to data provided by the French government, China consumes 6.6 kilograms of beef per capita per year, less than a third of the French average.

Guillaume said he hopes more French meat producers will get Chinese approval to export beef to China. Guillaume also said he met with Chinese officials to discuss wider access for other French meat products including pork, poultry and processed meat.