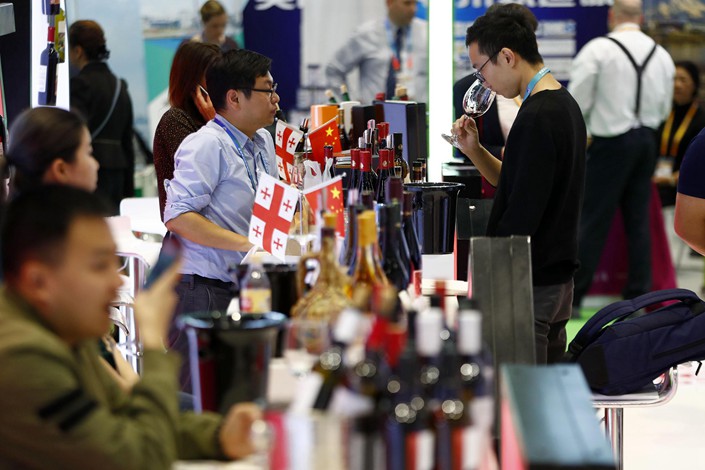 All the tea in China is apparently not enough for the nation’s increasingly wealthy consumers, who are turning to foreign cuisines, with imports of overseas foods swelling past $60 billion last year, according to a new report.

China imported $61.65 billion worth of food last year, a rise of 11.1% over 2016, according to a new report from the China Chamber of Commerce of Import and Export of Foodstuffs that was released at the first-ever China International Import Expo in Shanghai on Wednesday. China became the world’s biggest food importer in 2011.

The report also noted that the private sector has come to play a huge role in supplying Chinese consumers with overseas goods since food imports were liberalized in the 1990s, from supplying 0.7% of imported goods in 1997 to 51.3% last year.

Unlike other major Chinese imports, such as materials for building and energy, food is not seen as a “strategic industry,” said Chenjun Pan, a senior analyst at Rabobank, meaning the private sector has been able to play a larger role than it has in more-sensitive areas. The compound annual growth rate for food imports has been 14.6% a year for the last 20 years, outstripping even the country’s breakneck economic growth and reflecting the growing demands of Chinese consumers, analysts say.

China’s biggest food imports are meat, dairy and aquatic products such as seafood and salmon, valued at $9.5 billion, $9.3 billion and $8.5 billion respectively last year. Yet last year also saw major increases in imports in some areas, with dairy imports up 36.1% for the year, followed by tea with 33.9% and nuts with 31.8% growth.

The growth in nut product purchases “might reflect the ‘trading up’ trend in China,” Pan said. “As people enjoy wealth, they want to have more products they as consider as premium quality and healthier. While China is the world’s biggest tea exporter, the increase imports also reflects ‘trading up’ as people want more of range, particularly ‘Western’ style tea, a trend catered to by a rising service sector,” she added.

There was also a surge in butter imports, which were up 65% year-on-year, and yogurt, which was up 58.8%. While tea was up, coffee was down 47% from a year earlier, although this likely reflected oversupply a year earlier, the report suggested.

The main drivers for Chinese consumers are “quality, convenience, and experience, with exotic flavors and variety being of growing importance in the food market,” said an analyst with a market research company who asked to remain anonymous. Also, 71 million Chinese tourists traveled abroad in the first half of this year, and “they’re trying more overseas food and also want to find it at home,” the analyst said.

A big part of the overseas consumption also appears to be concerns about domestic food safety, analysts said. Infant-milk formulas accounted for 42.8% of the total imports in the “dairy” category, with a value of about $4 billion. This is likely a legacy of several scandals, including one in 2008, when the industrial chemical melamine was found in several milk products. The chemical was blamed for the deaths of six infants and for making up to 300,000 other children ill.

The U.S., Australia and New Zealand were the biggest exporters of food to China last year, according to the report, although analysts expect imports from the U.S. to be much lower this year due to the imposition of tariffs on U.S. foods as part of the ongoing Sino-U.S. trade war.

A study conducted by the University of Sydney Business School and KPMG found that China’s agricultural investment in Australia stood at around $800 million, about 10% of its total investment in the country last year. “This investment is driven by Chinese upper-middle-class food consumption demand, with diets increasingly centered on high protein intake from products such as dairy, beef and seafood,” said Wei Li, a lecturer at the school.