By Liu Yanfei and Coco Feng 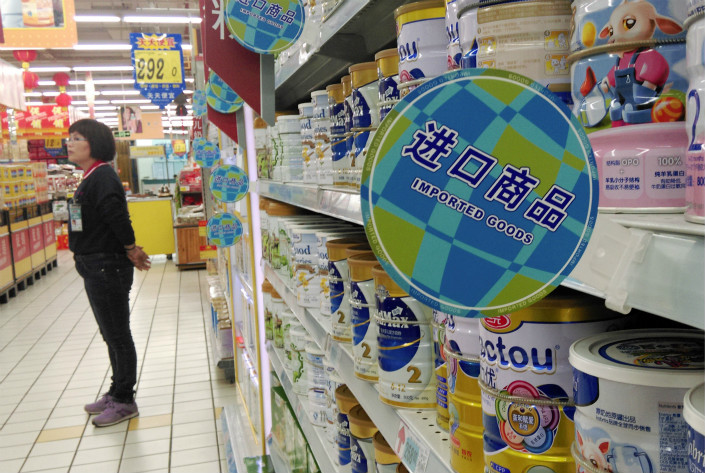 Families with 2- to 3-month-olds in Hong Kong and on the Chinese mainland spend on average $304 and $286 per month on infant formula, the highest among parents globally. Photo: Visual China

Parents in China spend more on infant formula than anywhere else in the world, a study has found, thanks to lingering fears about cheap domestic products years after the 2008 melamine scandal.

Families with 2- to 3-month-olds in Hong Kong and on the Chinese mainland spend on average $304 and $286 per month on infant formula, the highest among parents globally, according to a report released Tuesday by the Changing Markets Foundation, Globalization Monitor and SumOfUs, three groups that monitor large corporations’ practices.

But the report suggests parents may not be getting their money’s worth. “Milk formula companies are exploiting the concerns of Chinese parents, who still remember vividly the melamine contamination scandal and experience environmental pollution in the country, so (they) are willing to pay more for premium products, as well as buy imported products,” said Rena Lau of the Hong Kong-based Globalization Monitor, one of the report’s co-authors.

Only around 36% of babies under 6 months old worldwide are exclusively breastfed, creating huge opportunities for dairy producers, especially those that have entered the China market, where consumers were rattled by the 2008 scandal. That year, melamine-tainted milk power from well-known Chinese dairy brands killed six infants and made more than 300,000 babies sick.

But after studying more than 400 infant milk products from four leading global manufacturers — Nestle, Danone, Mead Johnson Nutrition and Abbott — the report’s authors said their “product differentiation is not science-based, but (is) instead informed by careful research into consumer preferences, and guided by a desire to increase manufacturers’ market share and profits, especially in highly competitive, rapidly growing Asian markets.”

Some of the formulas make claims that they contain ingredients that can alleviate health conditions like allergies and constipation, with little basis in nutritional science, the report said.

“It is very concerning that premium products cost up to 2.5 times more and that they are not based on any scientifically proven beneficial value, but on parents’ willingness to pay,” Lau said.

The Hong Kong Infant and Young Child Nutrition Association, formed by seven dairy makers, including the four studied in the report, rejected Caixin’s request for comment on the report, saying it couldn’t get in touch with all members to give a unified response.

China’s food authority has implemented major steps to reform the unruly infant-formula industry, introducing a requirement in October 2016 that manufacturers — both at home and abroad — to register their products with the country’s Food and Drug Administration by the end of 2017. The law also stipulates that each company is limited to selling no more than nine different products.

The rule is expected to force some manufacturers with little market share to leave the market, halving the number of infant-formula products in China to about 1,000.