By Quan Yue and Shen Lu 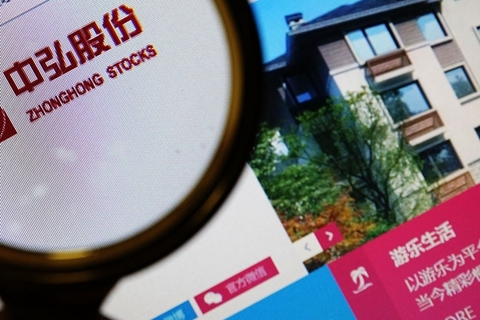 Property developer Zhonghong Holdings Group became the first company in China to be delisted by regulators because of poor share price performance amid a company debt crisis.

The Shenzhen Stock Exchange announced the delisting Thursday as Zhonghong’s shares have constantly traded below par value. Zhonghong will enter a delisting period of 30 trading days starting Nov. 16 and be removed from the exchange thereafter, the bourse said.

Zhonghong said in a filing that it will strictly follow regulators’ requirements and complete the delisting and follow-up work.

The Shenzhen bourse’s decision reflected regulators’ attempts to address stocks with poor earnings amid a recent market rout that wiped out nearly 30% of the Shanghai and Shenzhen indexes since their January peak.

A market data provider operated by Securities Times showed that nearly 40 stocks in Shanghai and Shenzhen traded at less than 2 yuan ($0.29) as of Thursday.

Zhonghong halted trading Oct. 18 at 0.740 yuan. Before the suspension, the stock traded below the face value of 1 yuan ($0.14) for 20 consecutive trading days as the company struggled with weakening profitability and mounting debt.

Both the chairman and the general manager resigned before the suspension.

A Caixin investigation found that Zhonghong and subsidiaries amassed more than 80 billion yuan in outstanding liabilities, including some off-balance sheet borrowing, by the end of 2017. About 40 billion yuan of the debts mature by the end of this year.

Zhonghong reported a net loss of 558.5 million yuan for the third quarter, compared with a net profit of 53.4 million yuan a year earlier. The company booked a full-year loss of 2.51 billion yuan in 2017, citing slowing sales amid a government crackdown on property market speculation.

Beijing-based Zhonghong listed in Shenzhen in 2000. It has 8.39 billion outstanding shares, valuing the company at 6.21 billion yuan. A market analyst attributed Zhonghong’s share price slump to its aggressive expansion of equity. Since 2011, Zhonghong expanded its publicly traded shares from 562 million to the current 8.39 billion through share splits and replacements.

In 2016, Zhonghong was hit with hefty fine for involvement in a high-profile case of securities market manipulation masterminded by convicted hedge fund manager Xu Xiang.

The Shenzhen Stock Exchange required Zhonghong to work out a plan to protect the interests of its investors after the delisting and fully disclose related information to investors. The company’s interim report showed that it had 246,600 shareholders.