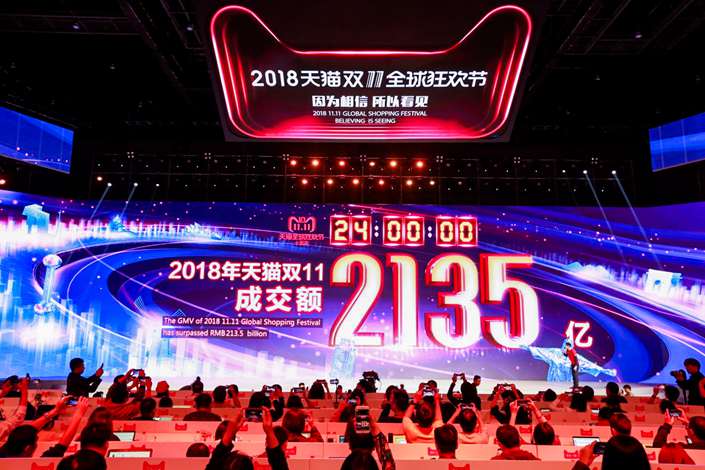 * However, growth in the figure came in at 27%, the lowest rate since the company first started the sales event

(Beijing) — China’s largest e-commerce platforms have rushed to report their record-setting performance on Sunday’s ‘Double 11’ shopping festival, though sector leader Alibaba has seen growth in the festival’s value decline amid the slowing economy.

Alibaba Group Holding Ltd. booked a record 213.5 billion yuan ($30.7 billion) in gross merchandise value — the value of the goods sold by stores using its platforms — during the 24-hour long shopping festival on Sunday, a 27% increase year-on-year. This was the lowest year-on-year expansion since the company created the celebration of consumerism in 2009.

The annual event — originally dedicated to the country’s singletons — has since developed into the world’s largest one-day shopping spree as other e-commerce players followed in Alibaba’s footsteps.

While Alibaba reports its Double 11 numbers based only on the day of the festival, JD.com Inc. — the sector’s second largest player — reports the run-up to the event too. The company reported a total of 159.8 billion yuan of gross merchandise value during Double 11 and the 10 preceding days, up 26% from a year earlier.

Smaller competitor Suning.com Co. Ltd., which specializes in appliances and electronics, didn’t publish a total figure, but said its sales during the event, including from its physical stores, were up 132% year-on-year.

Companies have worked hard to create as big a figure for the day as possible despite the slowing economy, as Double 11 is a closely watched barometer for consumer confidence and the sector’s performance.

“Different companies definitely have different strategies and publicize the most impressive figure they can to impress the public,” an analyst said.

Early this month, Alibaba released its 2019 revenue guidance, in which it said the next fiscal year may see revenue fall by 4% to 6% from 2018, citing the ongoing trade tensions between U.S. and China as an uncertainty factor.

This year, Alibaba has recruited its various non-e-commerce units to ramp up interest in the event and create the largest single-day figure possible. Its national food-delivery unit Ele.me and 600-location supermarket chain Hema have rolled out coupon campaigns and other discounts.

These tactics have prompted concerns that the company might be stretching what counts as a sale to create a figure that doesn’t accurately represent the business done on its e-commerce platforms on Double 11.

In response, Alibaba CEO Daniel Zhang, told reporters on Sunday that the sales from Hema and Ele.me won’t contribute to the headline figure, which will mostly be made up of its two e-commerce platforms Taobao and Tmall.

However, Zhang said it did include sales from some of its brick-and-mortar platforms, such as Beijing-based home improvement chain Easyhome, in which Alibaba took a 15% stake early this year. Zhang said only sales that were motivated by advertisements on Tmall would “very likely” make it into the headline figure.

JD.com’s headline figure also includes business done by its partners in the run-up to Double 11, a company source told Caixin.