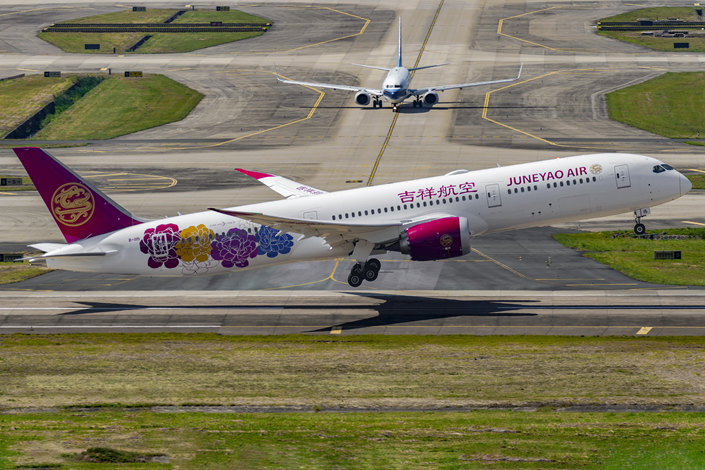 A Boeing 787-9 Dreamliner of Juneyao Airlines completes its maiden flight, from Shanghai to Shenzhen, at Shenzhen Bao’an International Airport in Guangdong province on Oct. 26. Photo: VCG

China Eastern Airlines Corp. Ltd. is set to invest up to 3.2 billion yuan ($459 million) in smaller rival Juneyao Air through a share-purchase program, a move that follows the latter’s recent purchase of a minority stake in the state-owned carrier.

The board at Juneyao Airlines Co. Ltd. has approved a plan to issue up to 169 million nonpublic A shares to an investment firm wholly owned by China Eastern, the Shanghai-listed carrier said in a filing to the stock exchange (link in Chinese). After the deal, China Eastern will own about 8.6% of Juneyao Air.

The new funding will be used by Juneyao Air mainly to procure three Boeing Co. jetliners as it expands its current fleet of 70 Airbuses, according to the filing.

This move followed a similar deal in July, when China Eastern said it would issue new nonpublic shares worth up to $2.2 billion to bring in two investors — one being Juneyao, the other a state-backed fund.

Currently, China Eastern and Juneyao have a combined share of nearly half of the Shanghai’s aviation market, according to Northeast Security, a Chinese brokerage.

Equity swaps between the two carriers come after Beijing called for more financial support of the private sector that also includes aviation, as private companies may have difficulty competing with larger state enterprises due to a lack of available funding channels.

Juneyao Air, which started operations in 2006, focuses mainly on short-haul routes in eastern China, including the cities of Shanghai and Nanjing. It currently serves more than 120 routes at home and abroad. But the airline is also looking to launch its first long-haul flight, to Helsinki, Finland, aviation site Simple Flying reported last month.

China Eastern, China Southern and Air China are the country’s three largest carriers, which have a combined fleet of more than 2,000 jetliners.