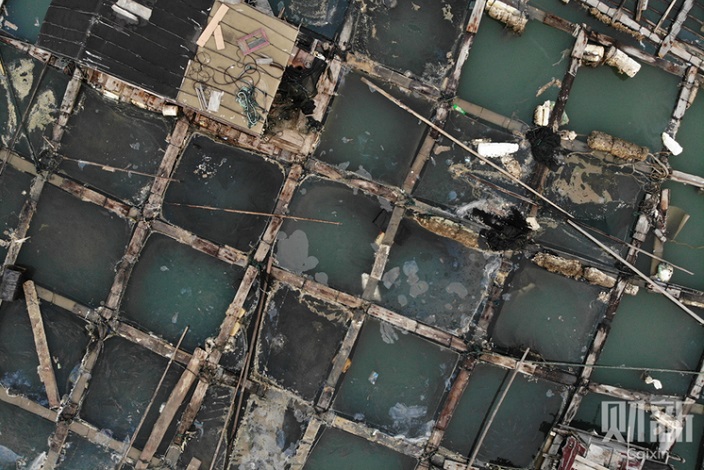 Villagers in Xiaocuo told Caixin they had spent hours trying to clean toxic residue off their fish farming equipment after a petrochemical spill on Nov. 4. Photo: Zhou Chen/Caixin

* A local mayor listened to villagers’ complaints, only to respond with terse promises that “it will be reported to the higher-ups”

* Some residents continued to gather outside the factory that they think is responsible for the spill, saying that intended to pressure the company into offering them compensation

(Quanzhou) — Anxious villagers crowded into a building near the ferry terminal of Xiaocuo village in Quanzhou, Fujian province, on Sunday, hoping to find a sympathetic ear for their stories of ruined fishery equipment and noxious fumes.

It had been exactly one week since a broken pipe leaked nearly 7 metric tons (7.7 U.S. tons) of C9 hydrocarbon — a petrochemical substance frequently used as a solvent in paint — into the water near the village, which is home to a fish-farming community.

Chen Baoxi, the mayor of Nanpu town, which includes Xiaocuo, quietly listened in a makeshift reception hall as villagers described their complaints, responding only with terse promises that “it will be reported to the higher-ups.” Officials stood by and watched, stopping villagers and reporters who tried to take photos. When approached by a Caixin reporter, Chen said he was busy as he declined an interview request.

Local government officials had initially declared that water and air quality in the area were back at safe levels just a day after the spill, which happened shortly after midnight on Nov. 4. But after an outcry by local residents and reports of continued contamination, as well as calls by social media users for greater transparency, authorities released more information on the effects of the spill.

Four employees of Fujian Donggang Petrochemical Co., the business that owns the petrochemical terminal where the spill happened, are being investigated, state media reported Sunday.

“My brother woke me up at 4 in the morning asking for help. I asked what was going on, and he said his fish-farming rafts had sunk,” one villager told Caixin, recalling the hours immediately after the leak.

When he reached the water, he found that the surface of the rafts were covered in a strong-smelling yellow oil that clung to everything it came into contact with — buckets, washbasins, and the skin on their hands, he told Caixin. The anxious villagers repeatedly called the official Environmental Protection Bureau hotline, but the person on the other end hung up immediately after answering their calls, he said.

“Initially, we didn’t know that C9 was poisonous, so we used our bare hands to grab some of the rafts. Now, the smell is too strong, and we don’t dare to get close to the rafts. We can only watch from the shore as our fish slowly die of poison,” said another villager, who called himself “Brother Abalone.”

Brother Abalone said he did not believe that only 6.97 metric tons of C9 had been spilled. “Many of the photos and videos we took looked more serious than what was reported by the government, but they were deleted when we posted them on the internet,” he told Caixin.

Some residents had begun gathering at the gate to the Donggang factory after the spill, and were still there on Sunday, when they told Caixin that they intended to block vehicles and pressure the company into offering them compensation for their losses.

The government of Quanzhou city, which includes Xiaocuo and Nanpu, said Thursday that it was assessing the damage to local fisheries and was preparing to offer affected residents compensation.

‘Didn’t know at the time that it was toxic’

More than 50 people had received medical attention at the local Quangang Hospital for suspected exposure to the leaked hydrocarbons by Thursday, local authorities said.

Many of them had been working to save their fish farms, Caixin learned. One villager said that they “didn’t know at the time that it was toxic,” and that the government had not warned them to stay away from the leaked substances. C9 hydrocarbons are known to irritate human skin, eyes and lungs with prolonged exposure.

Some residents who had joined the cleanup team led by the local government said they had not been given appropriate protective equipment. “The mask was the simplest type of surgical mask, and didn’t filter out the smell at all, so I threw it away,” one man said.

Du Liqin, a 44-year-old resident of Xiaocuo, who was still hospitalized on Saturday, said she had spent hours scooping out oil from between rafts on Nov. 4, but she stopped after the skin on her hands began to peel and she became dizzy and started feeling pain in her chest.

She went to Quangang Hospital on Nov. 5, where she found that many of her neighbors were also waiting to receive treatment for similar symptoms, she told Caixin. Doctors initially hooked her up to an intravenous drip, and then told her to rest at home. But Du returned to the hospital the next day after her symptoms worsened.

Xiao Xueying, another hospitalized villager, told Caixin that doctors had performed psychological assessments on the villagers, and had told them that their symptoms were not subsiding because they were thinking too much about them. “How can that be possible? We are all grown-ups. Why would I say that I’m feeling pain for no reason?” Xiao asked. “While I’m lying here, my mind is still with the rafts.”

Xiao had been given two forms that asked her to describe her levels of anxiety and depression, but she had refused to complete them, she said.

Du said that government officials had come to the hospital several days after the spill to express their sympathy, and that the hospital was providing treatment free of charge. Xiao added that officials had offered the patients money, but that she had not accepted it.

“Instead of money, we would like some kind of statement,” she said. “What kind of poison have we been exposed to? When will we recover? How can we measure the losses to our fish farms?”

Villagers have been living in fear of toxic pollution long before the spill, they told Caixin. Chemical plants have sprung up around Xiaocuo in recent years as the area’s petrochemical industry developed.

One local resident working at the petrochemical terminal told Caixin that many oil and chemical tankers directly released wastewater into the sea around Quangang county, which is part of Quanzhou. Other villagers said they had complained about pollution but had not received any response from local authorities because they had difficulty obtaining evidence.

The Quanzhou government has commissioned an environmental impact assessment after the Nov. 4 leak, the government said Sunday. An investigation into the causes of the leak is in progress.