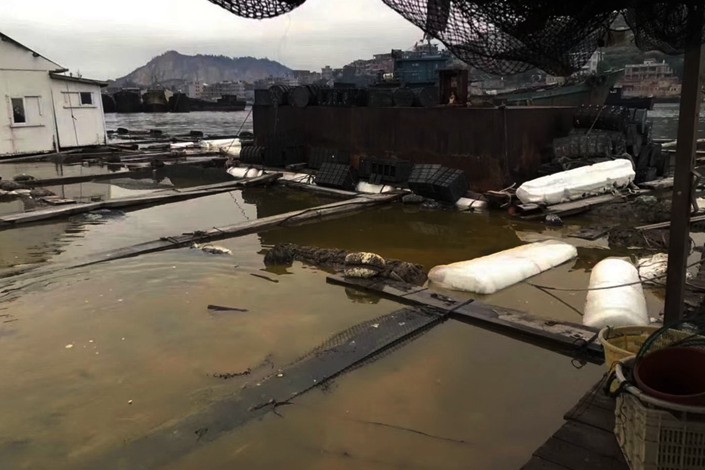 A wharf affected by the chemical spill in Quanzhou, Fujian province on Nov. 7. Photo: IC

Dozens of people are being treated for suspected exposure to leaked hydrocarbons after a petrochemical spill in southern China’s Fujian province, local authorities confirmed Thursday.

Fifty-two residents of the Quangang port area in Quanzhou city have received medical attention at Quangang hospital, with symptoms ranging from nausea to throat discomfort, after “encountering irritating gases,” the Quanzhou government said in a statement published in multiple local newspapers. One person is in intensive care after falling into contaminated water, according to the statement.

A broken pipe at a petrochemical plant in the area leaked nearly seven tons of C9 aromatic hydrocarbon — a substance frequently used as a solvent in paint and rubber products — into the water early Sunday morning. The local government initially said a clean-up had brought water and air conditions back to normal safety levels by Sunday night. But local residents complained to reporters that toxic substances were still present in the air after Sunday.

Quangang port has suspended the sale and consumption of aquaculture products from the affected area, where 152 fish farmers had suffered damage to their fisheries across an area of 7.4 acres, according to Thursday’s statement. The government said it began its damage assessment Tuesday and is preparing to compensate affected fisheries.

It also said it intends to “seriously prosecute the people responsible” for the incident once it confirms the cause of the spill, which is thought to have been the result of a faulty pipe connector.

The spill has triggered calls by Chinese social media users for better safety measures in the petrochemical industry, as well as posts expressing anger at local authorities for not being forthcoming with information.

Pollution scares regularly make headlines in China, where poorly enforced or ineffective regulations allow many companies to continue unsafe practices until crises emerge. In September 2017, police in eastern China’s Zhejiang province found over 220 metric tons of diseased pig carcasses that had been improperly disposed of and that were suspected of contaminating drinking water. Environmentalists also allege that China’s largest wheat fields have been tainted by the toxic element cadmium, which can cause health problems including kidney failure and cancer.