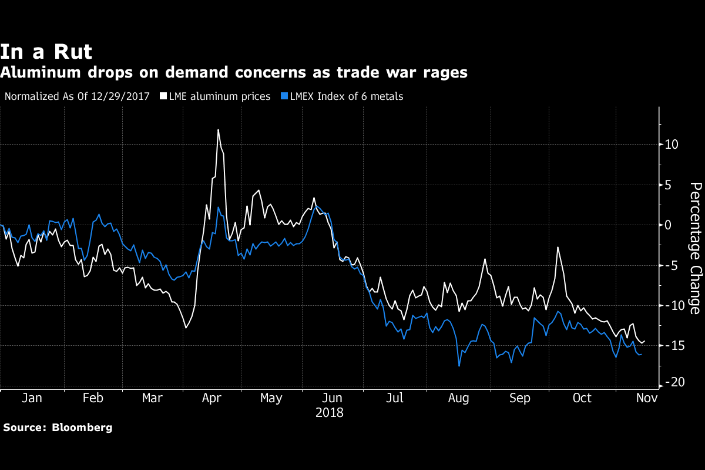 “We’re not very optimistic,” Ao Hong, deputy general manager of Aluminum Corp. of China, or Chinalco, said in an interview in Kunming on Wednesday. “We’re under huge pressure, so the company has to accelerate reform and cut costs internally.” While Chinalco’s businesses remain profitable, many smaller firms are making losses at current prices, he said.

Ao’s comments follow a reallocation of capacity by the government, which saw the company take over Yunnan Metallurgical Group Co. Ltd. Chinalco Chairman Ge Honglin had earlier told a conference in the province that the acquisition would boost capacity to about 8 million metric tons, a level that would see it vie with and possibly top China Hongqiao Group as the world’s biggest producer.

Aluminum has slumped on concern that the U.S.- China trade war will derail growth. At the same time, the world market for the metal, including in China, will swing to a surplus next year after a shortage in 2018, according to state-backed researcher Beijing Antaike Information Development Co. Ltd. That’ll further pressure prices just as Chinese costs are rising because of declining bauxite reserves — a key input along with alumina — and stricter environmental standards imposed on miners by the government.

“It’s very important to expand overseas exploration, mergers and acquisitions,” Ao said on the sidelines of the conference, as this year is the first time it’s been cheaper to buy the raw material from abroad.

To this end, Chinalco is studying the feasibility of an alumina project in Indonesia that would use local bauxite, he said, without giving details. The company might also look to develop alumina or aluminum projects in Guinea after this year’s Boffa bauxite investment, he said.

The push overseas is supported by the government. Yu Wei, deputy director of the Ministry of Industry and Information Technology’s raw materials bureau, told the conference that new capacity should be limited and idled capacity encouraged to relocate abroad. It comes against a backdrop of a swelling glut of aluminum, which Antaike predicts at 350,000 tons next year, from a deficit of 410,000 tons in 2018.

Worldwide, the researcher projects a surplus of 450,000 tons in 2019, a major reversal from this year’s expected shortfall of 1.6 million tons.

Antaike analyst Yao Xizhi told the Yunnan conference that Chinese aluminum consumption growth of 4.9% this year is the weakest pace in a decade and that debt levels are at a “warning level.” Producers lost an average of about 330 yuan ($47) a ton in the first nine months, versus a profit of about 500 yuan over the same period last year, according to Yao, who said that about 70% of the industry is under water.