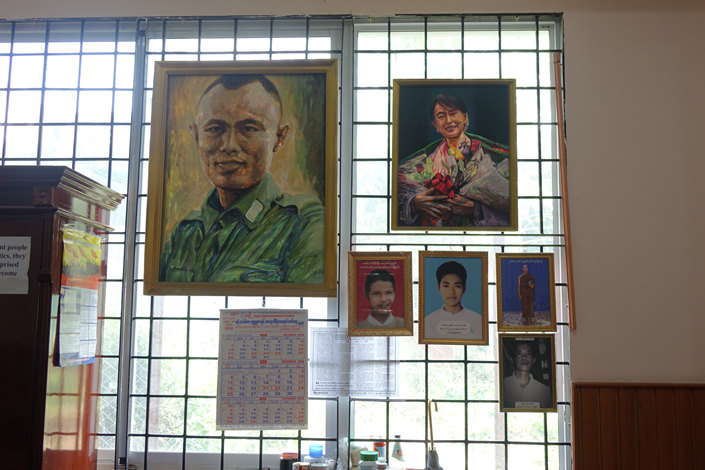 Portraits of National League for Democracy leaders on display at the party's headquarters in Yangon, Myanmar. Photo: Pei-hua Yu/Caixin Globus

Myanmar’s civilian ruling party is treading carefully when it comes to economic deals with other countries, thanks to the previous military administration’s legacy of problematic deals, National League for Democracy spokesperson U Myo Nyunt told Caixin.

Caixin spoke with Myo Nyunt in early November, around the time that the country’s Ministry of Commerce revealed it would move ahead with a China-backed deep-sea port project in western Myanmar’s Kyaukpyu. The deal, which was first drawn up in 2015 between the Myanmar government and a consortium led by state-owned Chinese conglomerate Citic Group, was put on hold after elections that year saw the National League for Democracy win a parliamentary majority after nearly half a century of military rule.

“The economic and political system we have inherited is rather corrupted, so we have to make some amendments to those systems,” Myo Nyunt said. “So we are very cautious to do further agreement in economic transactions.”

Myo Nyunt told Caixin that the current government’s economic advisers had said Myanmar would not be able to repay the Kyaukpyu project interest rate stated in the former administration’s agreement with the Chinese. Under the new agreement, the stake held by the Myanmar government and local businesses in the port project will increase from 15% to 30%, with the Chinese consortium taking the remaining 70%.

“We are very willing to accept our good willing neighbors’ investment in Myanmar, but we are considering our next generation’s ability to pay them back,” he said.

Additionally, the lack of transparency surrounding the original deal meant that even the NLD’s central executive committee did not know “the exact terms of the contracts made by the previous administration,” Myo Nyunt said.

China and Myanmar signed a memorandum of understanding in September to set up the 1,700-kilometer (1,056 miles) China-Myanmar Economic Corridor (CMEC), as part of China’s Belt and Road Initiative. The Kyaukpyu port will mark the westernmost point of the corridor, which is expected to run through areas of Myanmar with large populations of ethnic minorities.

When asked if minority groups were involved in the CMEC consultation process, Myo Nyunt told Caixin that there was “deep seated mistrust between (the country’s Burman majority) and those ethnic groups, and that’s a big obstacle to their participation in these processes.”

Myo Nyunt also described the strained relationship between the NLD and Myanmar’s military, which is still guaranteed a certain number of parliamentary seats under the country’s current constitution.

The Myanmar military’s spokesperson could not be reached by Caixin at press time.

The NLD has in recent months faced intensifying criticism for its ambivalent response to military violence against Rohingya Muslims in western Myanmar’s Rakhine state, where Kyaukpyu is located.

The arrests in December of two Myanmar-based Reuters journalists who had been investigating the killings of 10 Rohingya residents of Rakhine state, Wa Lone and Kyaw Soe Oe, as well as de facto national leader Aung San Suu Kyi’s defense of the arrests, have also attracted criticism. Myo Nyunt, when asked about the arrests, said the journalists were “trying to find out what happened in northern Rakhine. And this is a great concern of the military, (who are) quite concerned that their report might badly damage the military’s situation.”

“We have no full power to oppose the military, not to take action against (the journalists),” he said.

But Myo Nyunt defended the charges against three journalists from local media company Eleven Media, who had been arrested in October for alleged incitement. “If you examine some writings of the three reporters who were charged by the Yangon regional government, some are very bad. They are very rude to us, attacking the NLD government and its activities,” he said.

Xie Yilin and Lin Shu of Caixin Globus contributed to this report.