Letter: Xue Muqiao Deserves to Be Ranked at the Top of China’s Economic Reformers 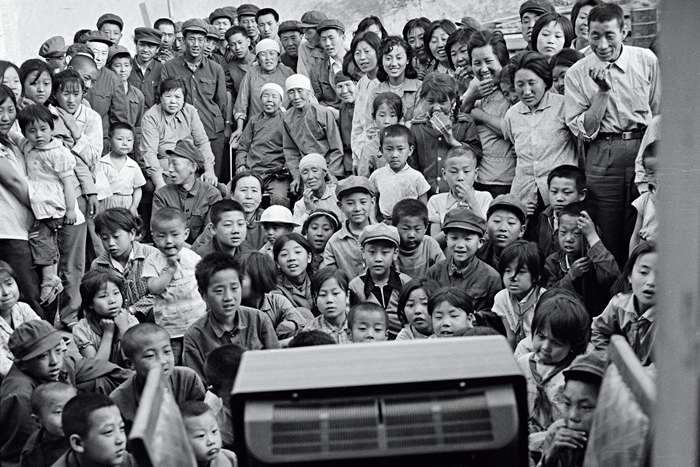 A crowd gathers around their village’s first TV set in Shangzhangjiafen, a village in Shanxi province, in February 1980. Seven years later, China would surpass Japan as the world’s largest manufacturer of TVs. Photo: Wang Yue

Caixin’s series of reports on the economists who were behind China’s economic reforms appropriately places economist Xue Muqiao in first place.

In fact, Xue should be credited with making the most comprehensive contributions to China’s early reform and opening-up. This is clearly evident in the following seven points:

First, when China decided to carry out its economic reforms in the late 1970s, policymakers advocated a new “Leap Forward” movement, which set impractical economic targets and introduced large quantities of advanced technology and equipment imported from abroad. As a major official who handled problems related to Mao’s “Great Leap Forward” (1958–60), Xue represented a dissenting opinion in the spring of 1978 and did not support the new “Leap Forward” plan.

In a long speech presented to the Central Party School in autumn of 1978, Xue was the first official within the ruling Communist Party elite to criticize the catastrophic consequences and painful economic lessons of Mao’s “Great Leap Forward.” By warning that similar mistakes should not be replicated in the future, Xue’s speech paved the way for subsequent adjustments to China’s economic policies.

At the time, Xue was under great pressure because the State Planning Commission (SPC), where he worked, was responsible for designing a detailed plan for a new “Leap Forward.” It was not until after key personnel adjustments at the commission in April 1980 that Xue’s views came to be accepted. Xue’s review of the “Great Leap Forward” has now become a mainstream narrative in economic history textbooks, establishing a strong foundation for China’s macro-control policies.

Second, Xue was both an economist and an official who held leadership positions in key departments of the Communist Party and the central government from 1943 to 1967. He deeply felt that the teaching of political economy in the ivory tower was out of touch with actual economic policy. Between 1978 and 1979, Xue repeatedly emphasized the need to coordinate economic theory and practice, which eventually became a priority for the newly established Finance and Economy Committee under China’s State Council (cabinet) and led to economists to become heavily involved in economic policymaking.

Xue established both the first and the second policy-making consultancies in the central government — the Economic Research Center in autumn of 1980 and the Price Research Center in 1981. Additionally, he was a member of the Party Groups of the SPC and the State Council Office for Restructuring the Economic System, as well as a senior consultant to both organizations.

Third, after Finance Minister Zhang Jinfu moved to Anhui to serve as provincial governor in 1979, Xue became the de facto leader of the Economic Reform Research Team under the State Council. In this position, Xue took the lead in designing an overall market-oriented reform plan whose goal was to build a socialist commodity economy.

The reform plan was included in a major document that was presented at a Communist Party meeting in September 1980. The five other plans proposed: a rural contracting system; a constitutional revision; a trial of the cases of the Gang of Four Counter-Revolutionary Group and the Lin Biao Counter-Revolutionary Group; and a resolution on post-1949 party history issues. However, it was not until four years later, at the Third Plenary Session of the 12th Central Committee of the Chinese Communist Party, that policymakers reached a consensus on the reform objectives proposed by Xue. His reform plan became the main content of the Chinese economic reforms launched prior to 1993.

Fourth, as the most authoritative expert on price in the Communist Party, Xue was the first person to point out that price reforms were key to China’s economic reforms. He also differentiated between overall price stability and flexibility of individual prices. In agreement with German economic expert Armin Gutowski, Chinese American economist Gregory Chow, and experienced economist Edwin Lim, Xue promoted price reforms, which was one of the major decisions of the Third Plenary Session in 1984.

Fifth, in 1978 Xue pointed out that instead of administrative regions, economic development should focus on economic zones based on resource flows. The economic zone in Shanghai contributed to its becoming one of China’s most capital-abundant cities. Xue’s proposal also later led to the launch of other regional development plans.

Sixth, the book titled “China’s Socialist Economy” that Caixin mentioned, which Xue published in 1979, has sold nearly 10 million copies. The concept of the “low-level stage of socialism” that he put forwarded in the book, has been widely spread. It’s very similar to the “primary stage of socialism” that the official discourse formally acknowledged in 1987. Besides, Xue’s argument for the legality of individual entrepreneurship in the book played an important role in solving the employment crisis at the time.

Seventh, Xue was one of the earliest and most important supporters of reining in credit after China’s credit lending spiraled out of control in 1984.

Fan Shitao is an associate professor at the Institute of Economics and Resource Management at Beijing Normal University. Nancy Hearst, librarian at Harvard’s Fung Library, contributed to this article by reviewing the first draft.