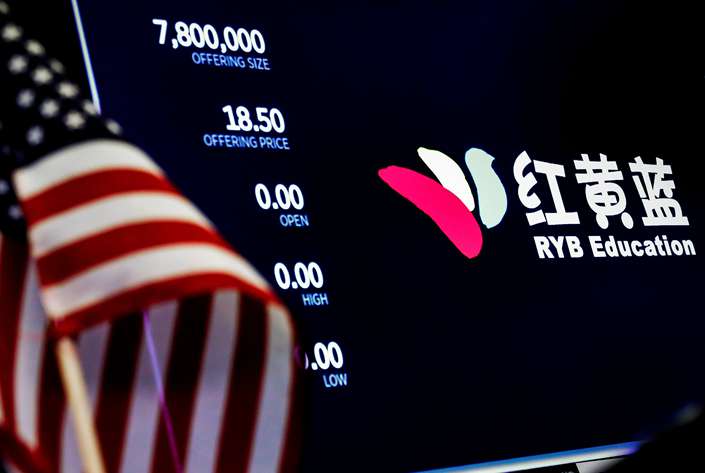 The logo and trading information for RYB Education Inc. are displayed on a screen during the company's initial public offering at the New York Stock Exchange in September 2017. Photo: VCG

* New policy bans private kindergarten operators from obtaining funding through a public listing, and bans listed companies from investing in the business through share sales or cash injections

* Share prices of private kindergarten operators listed across markets in the U.S., Hong Kong and the mainland plunge after the announcement

(Beijing) — China has announced a policy to tighten investment in preschool education following a public outcry over several cases of child abuse at private kindergartens, sending share prices of many listed companies in the sector plummeting.

The new policy — published by the State Council (link in Chinese), China’s cabinet, on Thursday — bans private kindergarten operators from obtaining funding through a public listing. It also said listed companies are not allowed to invest in the business through share sales or cash injections.

Following the rule, private kindergarten operators listed across markets in the U.S., Hong Kong and the mainland saw their share prices plunge, with the stock of New York-listed RYB Education Inc. falling as much as 53% on Thursday, wiping more than $200 million from the company’s value.

RYB was at the center of a public uproar late last year after several parents alleged that at least eight children were mistreated by adults at one of its kindergartens in Beijing, with needle marks found in the toddlers’ bodies. RYB’s scandal came just one week after a similar child abuse case involving a day care center in Shanghai that was affiliated with China’s largest online travel company, Ctrip.

The once-highly regarded education company, which was floated in September 2017 in the U.S., saw its business deeply affected by that scandal. For the first half of 2018, RYB reported a net profit of $2 million, down as much as 63% year-on-year, on revenue of $76 million.

In response for the latest policy, RYB said in a statement — widely cited by local media on Friday — that it has “convened an urgent meeting to study the implications.” However, “it is still weighting whether to delist its kindergarten-related assets, pending the release of more specific policy details,” it said.

The policy change marks a reverse in the Chinese government’s once relatively encouraging attitude, which had led to a large amount of private capital flowing into the private kindergarten and preschool sector.

“The future of private investment in this area is not very promising,” said Chen Meng, an analyst at China Securities, a brokerage. But she added that listed companies can still build their own kindergartens instead of buying peers.

On Friday, China Maple Leaf Educational Systems Ltd. led many other Hong Kong stocks with businesses in the same sector by closing down nearly 20%. On the Chinese mainland, Shenzhen-listed Vtron Group Co. Ltd. closed down by 10%.