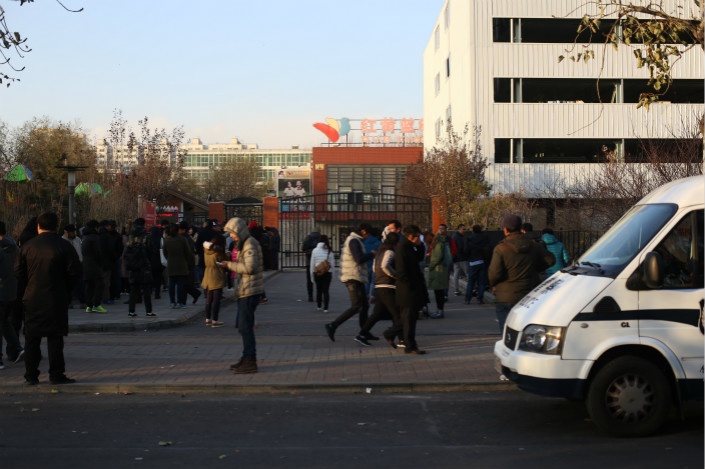 Parents gather outside a RYB Education kindergarten in eastern Beijing on Nov. 23 to protest against alleged mistreatment of their children by teachers. Photo: Chen Weixi/ Caixin

The police investigation into alleged child abuse at a Beijing kindergarten found no evidence that children were sexually abused, according to the official People’s Daily.

The newspaper cited local police saying that an investigation into 113 hours of video surveillance footage has found no clue of sexual abuse at the RYB Kindergarten in eastern Beijing’s Chaoyang district. The facility is run by New York listed RYB Education Inc.

But police said part of the footage stored in the hard drive had been damaged due to malfunctioning of the surveillance system.

The police confirmed that a 22-year-old female teacher, surnamed Li, had used needles to discipline children. Li has been arrested for alleged child abuse.

The news broke last Thursday after a protest by a group of parents outside the Beijing kindergarten. Parents alleged that at least eight children were mistreated by adults, with needle marks on their bodies. Some parents also accused teachers at this preschool of feeding children with unidentified “white pills and a brown colored syrup” and even sexual abuse, claims that were not backed up by the police investigation.

According to the police, a 31-year-old woman has been detained for fabricating and spreading the rumor about sexual abuse online. Another woman was punished by police for spreading the news and causing a serious negative impact on society, police said.

The Chaoyang district government announced on Saturday that the principal of the RYB kindergarten would be removed.

The incident is the latest of a string of child abuse cases at preschools and daycare centers that have recently been uncovered in China, promoting public discussion on stricter oversight on both teachers’ qualifications and daily operations in such facilities.

Earlier this month, teachers at a Shanghai daycare center affiliated to China’s largest online tour operator, Ctrip, were caught on a surveillance camera kicking and slapping disobedient or crying toddlers under the age of 3.