China Not Doing Enough to Stub Out Smoking, Experts Say

By Ren Qiuyu and Ma Jia 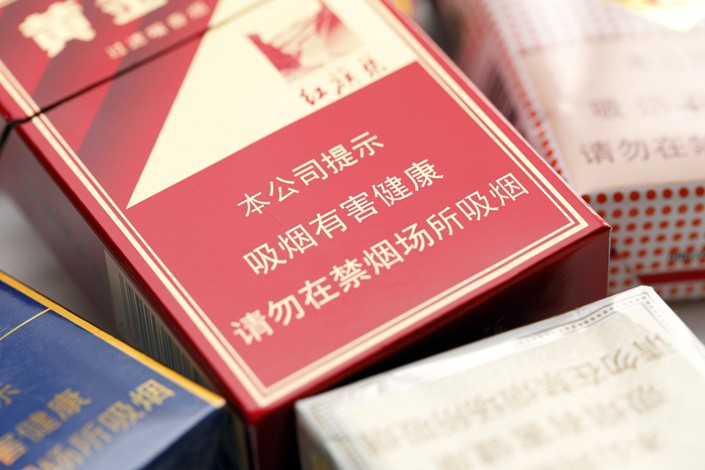 “Smoking is harmful to health, please do not smoke in non-smoking places” is seen printed on a cigarette box in May 2017. Photo: VCG

Participants in a recent Beijing forum called for the state-dominated tobacco industry to do more to meet World Health Organization (WHO) guidelines — which include conspicuous health warnings on packs — as deaths from the habit in the world’s largest cigarette market are set to triple in the future.

The WHO Framework Convention on Tobacco Control aims to limit the use of tobacco, and includes provisions on the production, sale, distribution, advertisement and sale of tobacco products. Although the treaty was ratified by China in 2006, the government has done little to enforce the framework.

The tobacco industry in China is dominated by the China National Tobacco Corp., which is overseen by the State Tobacco Monopoly Administration. The corporation’s profits and taxes rack up billions of dollars in revenue for the government, which makes it especially difficult for China to quit the habit.

At the Nov. 13 forum organized by the Chinese Association for Tobacco Control, a non-governmental organization affiliated with China’s Health Ministry, Xu Guihua of the Chinese Center for Disease Control and Prevention, noted that in China, “the area of the text warning has only reached 35%,” far less than that used by most other signatories to the framework.

In March, the State Council, China’s cabinet, announced that the responsibility of ensuring China adheres to the WHO framework would shift from the Ministry of Industry and Information to the National Health Commission, a move made official with an order last week.

Experts hope that this shift will enable China to make strides toward achieving goals laid out in “Healthy China 2030,” a government initiative to improve the overall health of the country and decrease the smoking rate from 27.7% in 2015 to 20% in 2030.

“This is a good step,” said Teh-wei Hu, professor emeritus with the School of Public Health at the University of California, Berkeley. “But they have to show how this can be realized in terms of raising tax and putting warning labels on the packages.”

Duan Jiali, director of the tobacco-control department of the Beijing Center for Disease Prevention and Control, pointed out at the symposium that attractive packaging without conspicuous warnings is an important factor in young people’s decision to smoke. “According to a survey of teenagers, printing large and clear warning pictures on the box packaging can effectively reduce the temptation of tobacco to them,” she said.

Studies have shown that Chinese smokers are less aware of the dangers of smoking than those in other countries and regions. Wu Yiqun, former head of the Chinese Academy of Preventive Medicine, said: “According to the survey, only 6% of young people in Beijing know the specific hazards of tobacco, and 93.4% of students can list at least one tobacco brand, up to nine.”

However, experts say that raising taxes on tobacco may be a more-effective way to discourage people in China from smoking. China’s tobacco sales hit a three-year high in the first half of 2018, leading to renewed calls for a tax increase on tobacco products.

“The tobacco industry can still make a lot of money without selling more cigarettes,” Hu said.

According to the WHO, China accounts for more than 43% of the world’s total cigarette consumption. If the smoking rate does not decrease, then the number of deaths due to smoking — estimated now to be 1 million people per year in China — will triple by 2050.