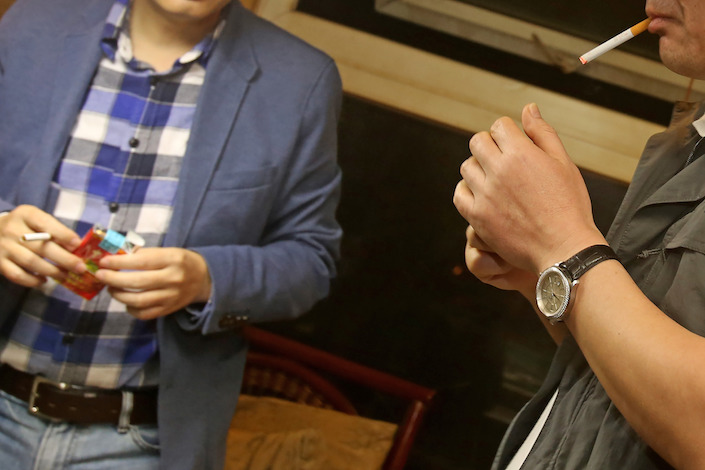 China is the world’s largest producer and consumer of cigarettes. Photo: VCG

China’s tobacco sales returned to near-record highs three years after a significant jump in tobacco taxes in the world’s largest producer and consumer of cigarettes.

Experts attribute the country’s rebounding tobacco consumption to consumers’ rising income and stagnant cigarette prices, calling for the government to increase the tax on cigarette consumption to help reduce smoking.

China’s tobacco industry produced 23.5 million cases of cigarettes in the first half of 2018, and cigarette sales reached 25.1 million cases. That was close to the high point before the tobacco tax increase in 2015, according to data from the State Tobacco Monopoly Administration (STMA).

More than one out of four Chinese adults smoke, according to a survey conducted early this year by the World Health Organization (WHO) and the University of International Business and Economics.

To reach this goal, raising taxes is the best solution, especially through a dynamic increase in line with economic growth and changes in per capita income, said Zheng Rong, a professor at China’s University of International Business and Economics.

Tobacco in China is cheap. The average retail price of cigarettes is just 13 yuan ($1.90) a pack. There are many cheaper brands on the market that sell for 3 to 5 yuan a pack. In the U.S., heavy taxes push cigarette prices to $6 to $8 a pack in most states and more than $12 in New York.

China has raised tobacco taxes only twice in the past. In 2009, the government reformed tobacco taxation by increasing the “ad valorem” tax, which is levied as a percentage of product value. However, the tobacco industry absorbed the tax increase rather than passing it on to consumers.

In 2015, China raised the wholesale tax levied on distributors from 5% to 11%. This time, consumer prices went up, causing tobacco sales to drop for two years in a row.

But to Chinese consumers, cigarettes have become even more affordable over time as incomes have increased with the country’s rapid economic growth.

China’s tobacco industry is benefiting. Ling Chengxing, director of the STMA, in an article on the agency’s website earlier this year encouraged tobacco producers to reach new records in production and sales.

Zheng said some other countries raise tobacco taxes once or twice a year. It would be difficult for China to do the same, so the best solution is to make a shift from price-based taxation to affordability-based policy, with the aim of holding down cigarette affordability, Zheng said.