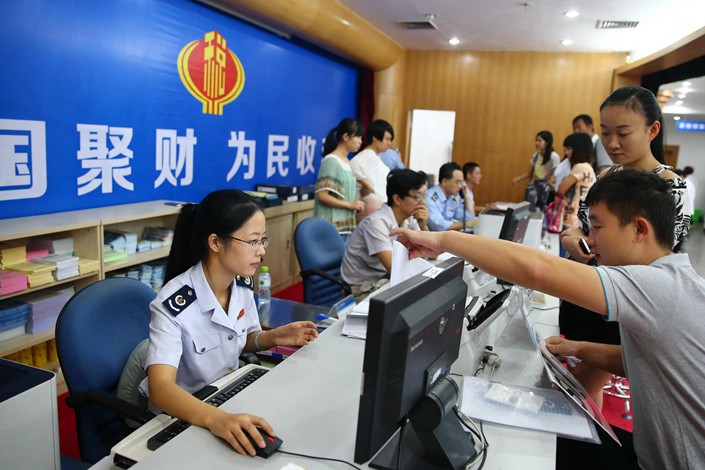 *The State Administration of Taxation said VC firms should pay a progressive tax rate of 5% to 35%, rather than the 20% flat rate they have paid previously in many areas

The statement, which reiterates already established rules, aims to put an end to questionable local policies that have allowed some firms in the lucrative industry to pay reduced tax rates.

The State Administration of Taxation has specifically taken issue with the tax breaks that local governments such as Beijing, Shanghai and Chongqing have offered to VC firms since early 2017. The incentives, which were designed to boost investment in smaller companies, allowed the individual limited partner investors of VC firms to pay a flat personal income tax rate of 20% on their gains. The tax is usually paid by VC firms on behalf of their partners.

In a statement following its quarterly meeting on Thursday, the State Administration of Taxation said VC firms should pay a progressive tax rate of 5% to 35%, depending on their revenue, with the highest rate applying to revenue above 100,000 yuan ($14,626). The administration also noted that the local tax incentives offered by some local governments were against the law.

Because VC firms make money by buying stakes in young, unproven companies and then selling their stock holdings later on, the loss of the incentives could make a big dent in their bottom lines, market participants said.

“Compared to a flat tax rate, progressive taxation will largely increase the tax burden of these firms, because it’s very easy for a venture capital that holds more than 100 million yuan in assets to be subject to the highest rate of 35% by making more than 100,000 yuan in revenue,” a veteran of the venture capital industry told Caixin.

China has quickened the pace of tax policy reform this year as mounting corporate and local government debt has become more of a drag on economic growth. The government has passed a measure to cut the individual income tax for the first time since 2011 in an effort to boost consumer spending. Meanwhile, it has taken aim at tax dodges by celebrities and investors in real estate.

Regulators have questioned the legitimacy of the tax incentives for venture capital firms for several years. Liu Jianjun, the former chief of the National Development and Reform Commission’s financial department, has said that investment returns should be taxed at a higher rate than individual income through a capital gains tax.

In a public speech in 2012, Liu criticized some local tax policies for “running afoul of national tax policy and international practice,” noting the typical capital gains tax rate around the world runs from 27% to 37%. Liu has since been promoted to vice director of the China Securities Regulatory Commission’s private equity department.

Others in the venture capital industry have quibbled with the timing of the policy, arguing that the change could dent long-term confidence in the industry. “When the economy was good and taxes revenues were sufficient, the national bureau turned a blind eye to local bureau’s tax breaks,” one senior private equity executive said. “Now that economic growth has slowed, the local tax bureaus have come under growing pressure to turn off the tap.”

Some venture capital firms in Shanghai and Beijing told Caixin that they have already received notices from the tax administration requiring them to pay higher taxes on their income. However, they are taking a wait-and-see approach to complying.