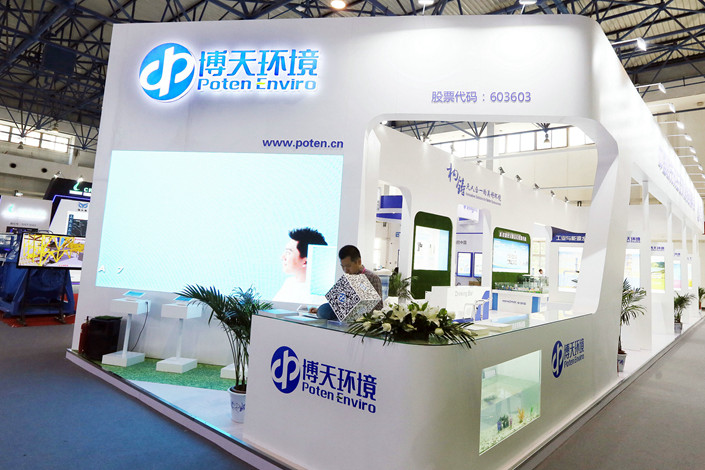 *If shareholders of other companies that receive loans from government-sponsored bailout funds do the same, it could stymie attempts to stabilize the stock market

(Beijing) — Major shareholders of a Shanghai-listed company have decided the time is right to dump their holdings after their company received 50 million yuan ($7.2 million) from a local government-backed bailout fund.

Three shareholders of Poten Environment Group Co. Ltd. are planning to dump their entire holdings in the water management company, potentially booking several billion yuan in profit, according to a company statement filed to the Shanghai Stock Exchange on Monday.

The share sale bodes poorly for the government’s recent efforts to bolster confidence in a stock market battered by a vicious cycle of falling prices thanks to the pledged-share crisis. Government efforts have included the creation of a several local government-sponsored bailout funds, such as the one that provided funding to Poten. However, such measures could run into problems if shareholders of other companies benefiting from the bailouts follow the lead of Poten’s investors. Rampant share dumping would undermine the government’s goals of stabilizing the country’s $7 trillion stock market and aiding struggling private companies.

The government’s bailout campaign for the private sector has already run into several unintended consequences. They included a renewed hunt for so-called shell companies amid speculation that regulators have softened their stance on backdoor listings, as well as a spike in the share prices of problematic companies that have unexpectedly managed to qualify for rescue funds.

In its statement to the exchange, Poten said the three shareholders, all institutional investors, are planning to unload their entire stakes in the company between Dec. 12 and May 24, 2019. The investors’ combined holdings amount to 31.35% of the company’s total shares.

The sale would net the investors a profit of 2.3 billion yuan, based on its stock’s closing price of 16.29 yuan on Monday. However, a share sale of this size is also likely to dent the company’s stock price.

The three shareholders all stated that they are selling specifically to fulfill “their own cash needs.”

This year, Poten’s shares collapsed from a high of 37.86 yuan in January to a low of 11.5 yuan on Oct. 11 due to a liquidity crunch. However, from Nov. 12, a few days before the bailout plan for Poten was announced, until Monday, its share price rebounded by almost 40%.

Poten’s financial problems stemmed from the government’s crackdown on shadow banking and heightened regulatory scrutiny of the financial sector.

With alternative funding channels drying up, many major shareholders pledged a large portion of their holdings as collateral for loans. As the stock market slid, they had to hand over more shares or cash to compensate lenders for falling prices.

Brokerages and banks that lent money on the back of the pledged shares also started dumping the holdings to minimize their losses when borrowers failed to come up with the additional collateral or pay back their loans, creating a vicious cycle of downward pressure on share prices that has rattled the authorities.

Poten reported its third quarter net profit rose 15.97% year-on-year to 159 million yuan, according to its latest financial statement. Meanwhile, its revenue nearly doubled to 2.9 billion yuan. However, the company has a debt problem.

According to its first-half financial report, Poten has a liabilities-to-assets ratio of 78.65%, making it the 193rd most indebted company of 3,558 mainland-listed companies.