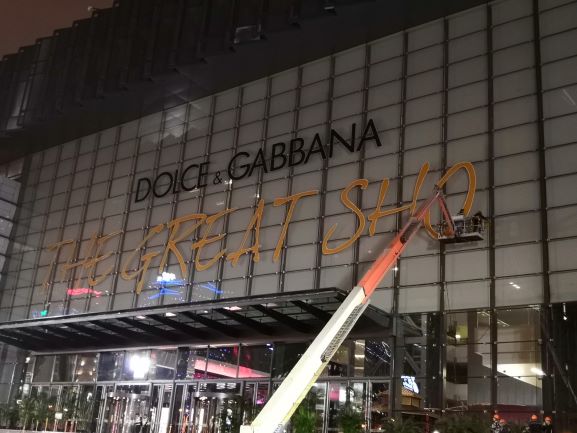 The set of the Shanghai show that never was. Photo: VCG

The backlash against Dolce & Gabbana’s China controversy is still going strong – so strong, in fact, that the company has issued another apology.

In a second apology post on Instagram, D&G founders Domenico Dolce and Stefano Gabbana address the postponement of their Shanghai show, which had been scheduled for Wednesday, but was cancelled after several celebrities dropped out in response to a ‘racist’ ad campaign.

"Our dream was to bring to Shanghai a tribute event dedicated to China which tells our history and vision. It was not simply a fashion show, but something that we created especially with love and passion for China and all the people around the world who loves [sic] Dolce & Gabbana. What happened today was very unfortunate not only for us, but also for all the people who worked day and night to bring this event to life.”

The backlash began earlier this week after the brand shared three videos on Instagram featuring a Chinese-looking woman being told by a male voice how to use chopsticks to eat Italian food. In one clip, the male narrator asks the female model if the cannoli, a stick-shaped pastry, "is it too huge for you?"

By and large, commenters on the post appear unsatisfied with the apology. Says one: "As a big brand, you guys still fail to make a sincere apology after all these days. China has risen, and it's no longer a place for you to simply take our money and leave without showing respect." Says another: "Please go away from China market, we don't welcome you." Many simply post poop emojis – a reference to the alleged conversation in which Gabbana used the same emojis to describe China.