By Mao Kexin and Ren Qiuyu 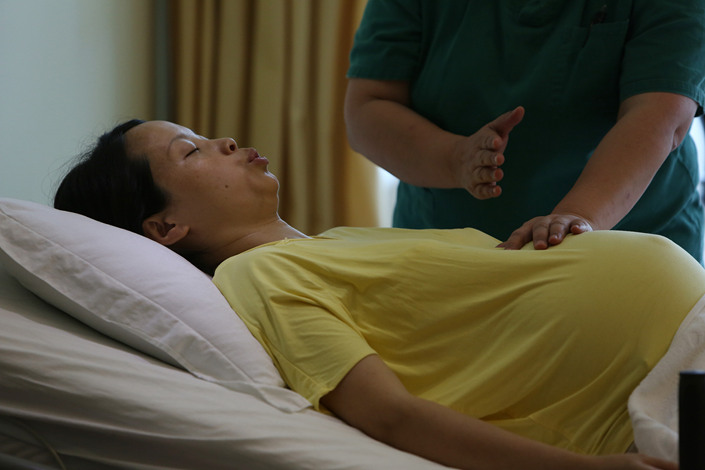 An expectant mother participates in a childbirth rehearsal in Shenzhen, Guangdong province, in June 2017. Photo: VCG

The announcement (link in Chinese) comes just over a year after a 26-year-old woman experiencing severe labor pains jumped to her death after her husband’s family refused to agree to allow her to have a cesarean section, or a surgical delivery of her baby. The incident sparked outrage and calls for women to be given a greater say in their childbirth options.

Many mothers in China will opt for a C-section if they do not have a natural birth. According to a recent survey published in the medical journal Lancet, the rate of C-sections in China dropped from 45.7% in 2012 to 41.3% in 2016, but the country still has one of the highest rates in the world. The World Health Organization (WHO) recommends a rate of no more than 10% to 15%. One of the most commonly cited reasons for opting for a C-section is fear of pain.

However, medical experts and the WHO stress that C-sections should be done only when medically necessary, as surgical births can cause complications for both the mother and baby. China’s rate is a cause for concern, and the pilot program reflects the government’s push for more natural births.

In China, only 10% of women giving birth receive spinal or epidural anesthesia, an injection of anesthetic into or around the spinal cord to numb some of the pain of childbirth, compared with 80% in the United States.

The aim of the pilot plan, due to be implemented from January and run into 2020, is to increase the epidural rate by encouraging hospitals to improve the quality of spinal or epidural anesthesia procedures provided, and to improve the training of anesthesiologists, obstetricians and midwives. By the end of 2020, 40% of women opting for natural childbirth should receive an epidural, the notice said.

The notice also said that hospitals and relevant departments should enhance the understanding of labor analgesia and strengthen health education for pregnant women and their families. It did not say how many hospitals will be involved in the pilot program, or name any of the hospitals that will be involved.

Dr. Liu Zhiqiang, chief physician at the Shanghai First Maternal and Infant Health Hospital and member of the advisory group for the pilot program, told Caixin that Ma’s suicide last year was the background for the formulation of the plan as well as a push to lower the rate of C-sections.

Liu said that one of the main reasons for the low rate of epidurals was a shortage of anesthesiologists, especially in public hospitals. In addition, there is also little financial incentive for hospitals to provide epidurals for natural childbirth. A pain-free natural birth takes hours longer than a C-section surgery, but the cost of a spinal or epidural injection is equivalent to the cost of general anesthesia for a short operation. This is another major obstacle to increasing access, Liu said.

After Ma’s suicide last year, there was a spike in the number of expecting mothers choosing less-painful delivery options, including water births and hypnosis. However, many of these options are more expensive than epidurals and require special equipment or know-how that most general hospitals do not have.