Woman in Labor Jumps to Her Death; China Asks Why 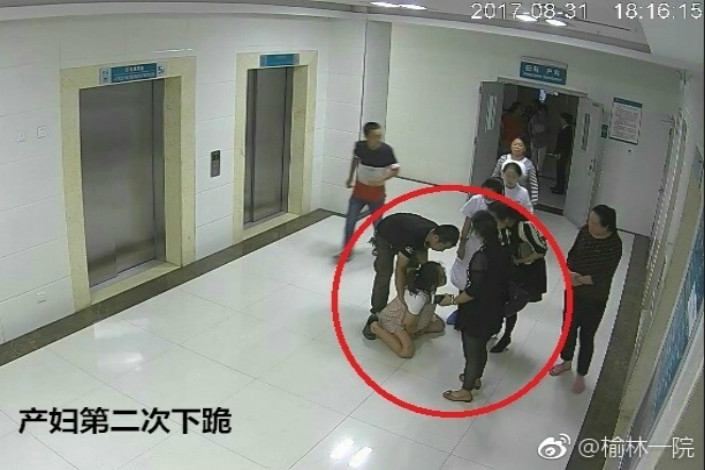 A video screen grab from the First Hospital of Yulin in Shaanxi province shows 26-year-old Ma Rongrong kneeling in front of her family in a hospital hallway on Aug. 31. The video has no sound so it is unknown whether she was kneeling in pain or begging the family for permission to let her have a cesarean section. Ma later committed suicide by jumping out of a fifth-floor window at the hospital.Photo: First Hospital of Yulin

Why did a woman in labor commit suicide?

While doctors and the family are busy trading blame over who refused the woman a cesarean section — the alleged reason she was prompted to jump out of a window in the labor room — netizens are calling for Chinese women to be given more of a say on their childbirth options.

Ma Rongrong, a 26-year-old pregnant woman, jumped from the fifth floor of a hospital in Yulin, in Northwest China’s Shaanxi province, on Aug. 31, police said.

Hospital authorities say Ma’s family had overruled her request for a C-section and ignored medical advice. But the woman’s husband denied these claims and said it was the hospital that was insisting on a natural birth.

Cesarean delivery is recommended by gynecologists in public hospitals in China only in situations in which natural birth may pose risks to the mother or the fetus. Pregnant women and their families can’t decide to have the surgery or schedule it in advance.

These precautions were introduced after China had one of the highest rates of C-sections in the world about a decade ago, with nearly half the babies born through the procedure in 2007 and 2008, according to the World Health Organization. Other independent studies have put the c-section figure in China for 2008 much lower, between 25%-30%. However, the WHO standard for C-sections is 10% to 15% of all live births.

The First Hospital of Yulin, where the death occurred, issued a statement on Sunday that said unbearable labor pain had caused Ma’s “mental condition to go out of control,” and that finally led her to jump.

Ma’s baby was due on Sept. 5, but she was admitted to the hospital on Aug. 30 after contractions started.

On that day, the prenatal check showed the fetus’s head had a large circumference, which would have made vaginal delivery difficult. But Ma and her husband both signed a document choosing natural birth after the doctor explained the condition, according to an official statement by the hospital on Wednesday.

The hospital and family agree that on Aug. 31, as her labor pains intensified, Ma requested a C-section many times. A hospital surveillance video showed Ma walking out of the labor room and kneeling in front of her family twice. But because the video has no sound, it’s unknown whether Ma was kneeling due to pain or if she was begging for a C-section.

Hospital records showed that both the woman and the hospital requested permission from the family three times to perform the operation, but her relatives allegedly refused and insisted on a natural delivery, according to a picture of the records posted by the hospital on Sina Weibo, China’s equivalent of Twitter.

However, Yan’s brother told Caixin that after Ma entered the labor room on the morning of Aug. 31, the doctor didn’t provide a consent form for the family to approve a C-section.

Ma’s family insists the hospital said there was no need for such an operation.

Ma’s mother said that the second time Ma walked out of the labor room, her daughter looked very stressed. Ma’s mother said she told Ma that she didn’t have to give birth naturally. Meanwhile, Ma’s husband had started calling friends to find a trustworthy doctor to do the C-section, according to Ma’s family.

After Ma returned to the labor room, at about 8 p.m., she went to the backup operating room opposite the labor room, opened a window, climbed on to the ledge that was about 1 meter (3 feet) off the floor, and jumped out when the medical staff were busy taking care of other women in labor, a spokesman at the hospital told Caixin. Hospital regulations forbid relatives from entering the labor room.

Both Ma and the fetus were killed.

According to Ma’s husband, Yan Zhuangzhuang, when he and the family were waiting in the hall, a nurse came out of the labor room and said, “The patient has disappeared.” Yan tried to enter the ward but was held back by hospital staff. After a while, the doctor told him that his wife was “on the first floor,” Yan said.

Behind the hospital building, Yan saw his wife’s body lying on the ground “without any clothes,” and hospital employees were lifting the body onto a stretcher. When the staff told them about Ma’s death, “all the family members lost their minds for a moment,” Yan said.

What led to Ma’s death?

After the incident, Ma’s family and the hospital clashed over who had opposed letting the woman have a C-section.

According to established procedure, hospitals in China won’t perform any operation if the family doesn’t agree. Otherwise, the family can hold the hospital accountable if any accident occurs related to the operation.

A spokesman at the hospital identified only as Yang told Caixin that the family may have refused to give consent to the operation because they believed that a natural birth was more beneficial for the baby, as ideas linked to childbirth in Yulin are “relatively backward.” Another possible reason may have been concerns about high operation fees.

Yan’s brother disputed this claim. He told Caixin that Yan would never have rejected the operation due to high costs. Yan’s family had a midlevel income compared to others in Zhangjiafeng village, the family said. The family owned a car and six “cave homes” — a form of earthen shelter dwellings commonly known as “yaodong,” according to Yan’s brother.

The village — where many people still live in caves — is in Suide county, an area included in the government’s 2016 list of national-level poverty-stricken regions.

Yan also told another version of the story. He said that when Ma walked out of the labor room and asked for a C-section, he agreed without hesitation. But the doctor said that there was no need to perform an operation as the fetus was about to come out.

Ma’s mother also said that after Ma asked for a C-section, the doctor said they had to wait for an hour if they chose to have an operation, but if they chose natural labor, Ma could give birth immediately. “It has come to the final step. We thought we must agree with the doctor,” she added.

Yan also questioned what the doctors, nurses, and midwives were doing when his wife jumped. And until Sept. 3, “nobody from the hospital explained how a 1.6-meter-tall, heavily pregnant woman climbed onto a windowsill as high as 1.13 meters” above the floor, Yan said.

The hospital said there were five pregnant women in the labor room when Ma jumped. The medical staff was busy taking care of other patients, and didn’t expect Ma to go to the backup operating room and jump out.

The hospital also posted an authorization letter that Ma has signed to authorize her husband to listen to the doctor’s explanation on the patient’s condition and decide on the method of medical treatment.

As Ma didn’t withdraw the authorization and her life wasn’t in danger — her blood pressure and the fetal heart rate were both normal before the incident happened — doctors can’t change the delivery method unless Yan agreed, the hospital added in the statement.