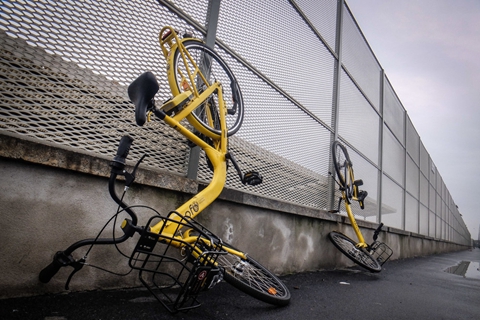 Ofo is facing a flood of requests for user deposit refunds. Photo: VCG

The financially troubled Chinese bike-sharing company Ofo, facing a flood of requests for user deposit refunds, is steering customers to accept an interest-bearing investment product rather than a cash repayment.

The rush for refunds started in October when ofo was hit with supplier lawsuits over unpaid bills and was forced to deny bankruptcy rumors. Ofo is backed by Chinese e-commerce giant Alibaba Group Holding.

The product offers an annualized return of 8% plus a new-investor bonus of 8%, according to the pop-up page. But the product has a 30-day lock-in period during which users don’t have access to their money. Users can withdraw the deposit with interest after 30 days.

In response to Caixin questions, Ofo said this is a “normal marketing activity” and users who accept the PPmoney product can then enjoy deposit-free rides in the future. Users who opt for a refund instead must wait 15 working days to get their money back, Ofo said.

PPmoney said it was testing a “normal cross-industry collaboration” with Ofo but has withdrawn the product in response to user feedback. An insider from PPmoney told Caixin that the collaboration with Ofo could be misunderstood as a mandatory bundling practice, so it has decided to pull back the product to conduct an internal assessment. It’s not clear whether the product will be re-offered later, the PPmoney insider said.

Xue Hongyan, director of Suning Financial Research Institute’s center for internet finance, said the practice would allow Ofo to get certain relief from financial pressure and help PPmoney get access to new users.

With current customer acquisition costs around 200 yuan per customer, ofo might make some money from the deal with PPmoney, Xue estimated.

Ofo, founded in 2015, is one of the few survivors in a booming bike-sharing market that led to a wave of consolidation. Alibaba invested $343 million for a 12% stake in ofo in March, a deal that gave the startup a valuation of at least $2.8 billion.

But with intensified competition and additional costs for removing abandoned bikes, Ofo’s finances appear to have deteriorated. In May, the company said it was scaling down its workforce to 8,000 from 12,000, according to local media reports. Ofo's operator, Dongxia Datong, has been sued for nonpayment of bills by bicycle suppliers and logistical support providers.

The company has also begun to retreat from an international expansion and to sell global assets. Now facing difficulties in its core business and without new financing for more than eight months, Ofo has been exploring all possible ways to generate cash.

Ofo has established a finance team led by its co-founder Yang Pinjie. The main business of this division is to direct customers to other online financing platforms, which value Ofo’s user data and credit system, a person close to Ofo’s senior management said.

Ofo’s app currently offers links to five P2P lending platforms, several of which have been exposed for compliance risks.

In August, Ofo was reportedly venturing into initial coin offerings (ICOs) with plans to reward riders with cryptocurrency tokens in Singapore. The company has denied that the plans were related to ICOs and said the campaign was just a marketing cooperation with Singapore-based cryptocurrency issuer GSELab.

But a person close to the matter told Caixin that his company has participated in the “packaging” of Ofo’s cryptocurrency offerings.