By Jason Tan and Wei Yiyang 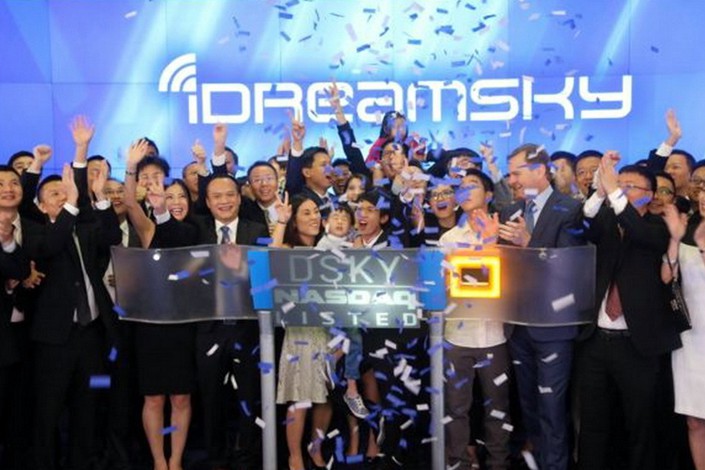 IDreamSky listed on the Nasdaq on Aug. 7, 2014, but later privatized. Photo: IC

Tencent-backed game publisher iDreamSky Technology Holdings Ltd. said Monday it aims to raise up to HK$990 million ($126.5 million) in a Hong Kong initial public offering (IPO), as it becomes the latest Chinese firm to seek a higher valuation by re-listing in Asia after privatizing from New York.

The offering will provide a litmus test of investor sentiment towards China’s online gaming industry, as it becomes one of the sector’s first since Beijing launched a major clampdown earlier this year.

The company, whose popular titles include “Temple Run” and “Subway Surfers,” said it will issue nearly 127 million shares, with an offer price of HK$6 to HK$7.80 per share, according to an updated prospectus posted on the Hong Kong Stock Exchange. It filed its original IPO application in May, but didn’t announce any fund-raising or pricing plans at that time.

The listing has attracted Japan’s Sony Corp. and e-commerce titan JD.com Inc. as cornerstone investors, according to the prospectus.

The game publisher delisted from the U.S. in 2016, about two years after floating on the Nasdaq, joining a slew of Chinese companies such as Bona Film Group and Perfect World Co. Ltd. seeking re-listings closer to home for higher valuations.

The IPO comes amid strong headwinds for the country’s gaming industry — the world’s largest with 620 million players, almost double the U.S. population.

Beijing this year has rolled out one of the harshest policy changes in recent memory that has put many smaller players on the brink of bankruptcy. Since March, authorities stopped approving licenses for new game releases following a major reorganization of government departments. The regulator further stepped up restrictions by announcing in September that it would cap the total number of games in operation, and explore a mechanism which has an age-reminder system and is able to restrict the amount of time that minors spend on games.

Industry leader Tencent’s stock is down about 36% since the freeze began, while No. 2 player NetEase is down by about 31%.

While it’s unclear when the new restrictions will take effect, iDreamSky acknowledged such measures would “have a material adverse effect on our business, financial condition, results of operations and prospects.”

“If we fail to obtain pre-approval for publication of online games from (the industry regulator) before launch of our games in a timely manner, we will not be able to launch new games as scheduled,” the prospectus said. But it stressed that despite the regulatory uncertainty, the company’s “business and growth potential remain robust.”

IDreamSky currently has 25 new titles slated for launch by 2019. Seven have been approved, while six are overseas releases and do not need approval in China, according to the prospectus.

For the six months through June, iDreamSky saw its profit surge more than eight-fold to 99.4 million yuan ($14.3 million), from 11.9 million yuan the same period a year earlier. Revenue rose 43.5% to 1.1 billion yuan.

The company said it planned to use nearly 40% of the net IPO proceeds to further expand its game portfolio. Over 20% will be set aside to fund acquisitions and overseas expansion, with another 20% plus to strengthen in-house research and development capability.