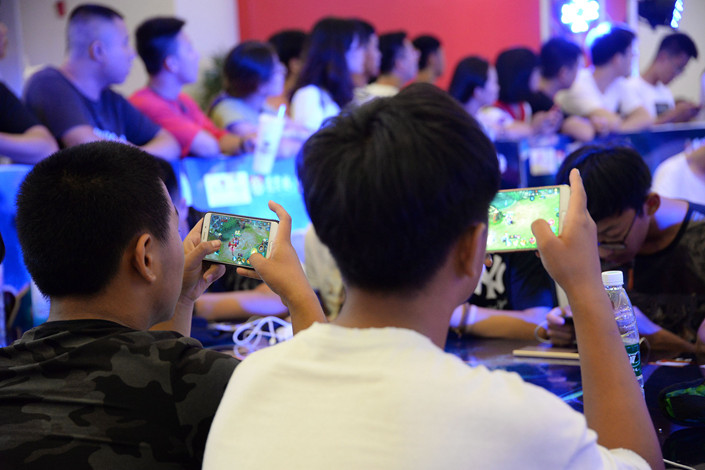 Mobile-game players square off at an “Honour of Kings” competition at a mall in Handan, Hebei province, on Aug. 5. Photo: IC

“A dozen friends of mine in the gaming industry have been squeezed financially, and some have neared bankruptcy,” said an executive from a midsize game company. “There could be thousands of companies facing this predicament.”

This is not an exaggeration. Many companies are facing the greatest challenge to their survival yet after China stopped approving new video game releases — and freezing the world’s largest market.

Eight months have passed without a sign that authorities will start allowing new games to be released anytime soon, industry watchers said.

“For many startups, this could be pure destruction. Some companies have bet heavily on a single game. … Now their games don’t even have a chance for a release to see if they will withstand the market’s trials,” the game executive told Caixin.

To release a game in China, companies have to apply for approval from the General Administration of Press and Publications (GAPP), which then carries out a vetting process to see if the title includes content deemed inappropriate, such as excessive violence or sexual connotations. The approval process for a domestically made game takes about three months, while getting the green light for an imported game can take six to 10 months.

Titles that are approved are then given a publishing number, which means they are ready to be released to the public.

The GAPP said in September it would tighten its oversight of the sector, having previously announced that it would cap the total number of online video games and releases of new titles, and explore a mechanism that restricts the amount of time that minors can spend playing games.

The GAPP said these measures aim to tackle poor eyesight among children who spend all day glued to video screens. It added that the rules have been approved by the State Council, China’s cabinet, and have taken effect, but didn’t say when that happened.

A blessing in disguise?

China became the world’s largest gaming market in 2016, surpassing the U.S. and Japan in terms of revenue. There are 620 million gamers in China, almost double the U.S. population, according to Newzoo, an Amsterdam-based industry tracker.

The rapid expansion of the sector created a highly competitive market in which companies have spent recklessly to seize market share and raced to release games, leading to a glut of games and game companies.

“If the industry keeps up its breakneck growth, it will still run into these same issues — with or without the license suspension,” one founder of a gaming firm told Caixin. “Now, with the clampdown, only the fittest will be able to survive, and they might grow into ‘unicorns’ to take on goliaths such as Tencent and NetEase.”

“Unicorns” is a reference to private companies that have a valuation of at least $1 billion. Gaming giant Tencent Holdings Ltd., whose businesses include social media, entertainment and fintech, had a market cap of over $350 billion as of mid-November, while NetEase Inc. had a cap of $31 billion.

Over the longer term, the founder said, the crackdown will encourage a more-sustainable model in which companies will strive to offer better games and services, ultimately benefiting consumers.

Analysts suggested that overseas expansion and business diversification are two possible ways for Chinese game firms to counter the impact of the approval suspension.

Generally speaking, most Chinese game publishers start their expansion by first entering the Hong Kong, Taiwan and Macau markets before moving onto Japan, South Korea, Southeast Asia, and eventually the U.S. and Europe. But analysts said that not many Chinese game companies have seen much success so far as they have to design new user interfaces for players in different regions, as well as jumping over local regulatory hurdles.

Some publishers, however, have seen returns on their investments outside their core gaming business.

Shanghai-based Giant Interactive Group Inc. began to flex its muscles in the fintech and online health care sectors in 2016. Its fintech unit contributed over 30% to total revenues for the six months through June this year.

But for the time being, the sector is feeling the pinch.

In the first half of 2018, at least 10 mainland-listed companies saw their respective revenues slump over 20% year-on-year, while the net income of at least five companies plunging more than 50%.

Tencent reported a profit decline in the second quarter — its first in more than a decade. Its gaming revenue continued to slip 4% in the third quarter, but overall earnings grew, thanks to advertising growth and investment gains.

Ma Xiaoyi, a Tencent senior vice president who looks after the gaming unit, told Caixin that the clampdown was slowing its growth. “We launched around 50 new titles in 2017, but only had 26 games for January to October this year,” Ma said.

Consultancy Newzoo in November downgraded its revenue projection for China’s gaming industry this year to $34.4 billion, from the projected $37.9 billion in August.