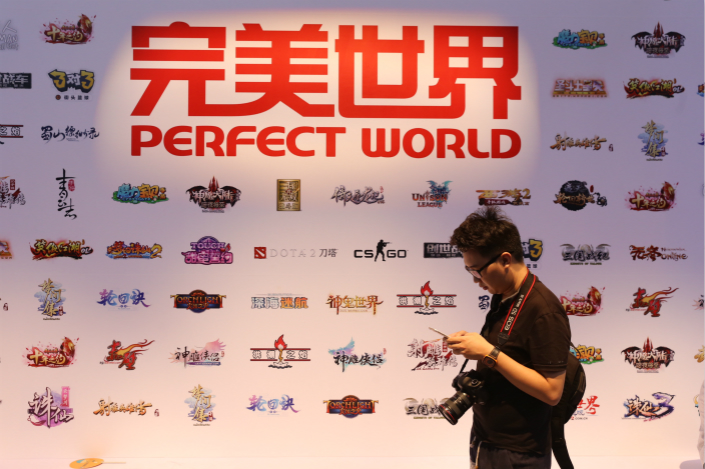 A vistor walks past Perfect World's stand at the 15th China Digital Entertainment Expo in Shanghai on July 30. Photo: IC

The Chinese company that co-produced the soon-to-be-released “Jurassic World: Fallen Kingdom” plans to raise up to 1 billion yuan ($156 million) through a private placement to shore up its film offerings.

Perfect World Co. Ltd. will issue up to 25 million shares, less than 20% of its total, the company said in a filing to the Shenzhen Stock Exchange on Monday.

The games-to-films heavyweight said it wants to rope in more investors to roll out more films as the industry has grown more capital-intensive. “Production houses in China are now moving toward quality over quantity,” Perfect World said. “To produce quality content, the production cycle has been prolonged with increased capital demand.”

Chinese technology juggernauts, including Baidu Inc., Alibaba Group Holding Ltd. and Tencent Holdings Ltd., have been vying for a piece of the booming entertaiment market. Huge invesment has been poured into producing original content for television, film or video-streaming sites.

The company didn’t name the productions it’s currently working on, but said it has “a great variety of titles in various genres” in the pipeline.

Perfect World this year is co-producing at least two franchise films with its American partner Universal Pictures — “Mamma Mia! Here We Go Again” and “Jurassic World: Fallen Kingdom.” The latter is scheduled for screenings on the Chinese mainland next week, and is expected to be yet another box-office hit.

These pictures are part of a broader deal struck in 2016, when Perfect World and Universal forged a $500 million partnership, under which the former will help fund the production of 50 Universal films over five years.

In 2015, Perfect World went private and delisted from the U.S., following a slew of other Chinese businesses that decided to float shares on their home market, citing a better valuation and stronger investor interest for internet and entertainment firms.

In 2016, Perfect World merged its filming and gaming units into one, and listed shares in Shenzhen.

Perfect World on Monday also forecast net profit for the first six months of this year to increase by 7.3% to 23.6% year-on-year, rising as high as 830 million yuan, thanks mainly to its gaming business.